Thousands of people gathered in Christchurch on Friday to welcome home athletes who took part in the London Olympic Games.

The New Zealand Olympic Committee says it chose the city for the official welcome home because it best symbolises national pride and character, and because it missed out on hosting Rugby World Cup matches last year.

Eighty-eight of the 184 athletes, including 23 of the medal winners, arrived at the Pioneer Recreation and Sport Centre in Spreydon to be greeted by cheering fans - many of them children - and civic dignitaries and business leaders. 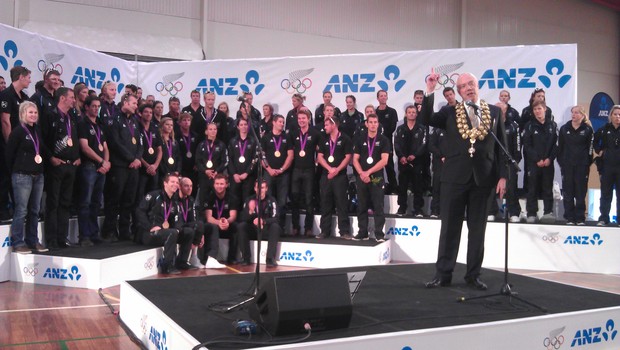 Chef de mission Dave Currie told the crowd the support from Canterbury and Christchurch had been overwhelming.

He said the London Olympics team was the most special team he has represented.

Officially welcoming the Olympians, mayor Bob Parker - in a reference to the Canterbury earthquakes - said Cantabrians understood what it was like to face tests.

The Olympians came in from the airport on two double-decker buses, passing a few schools on their way.

They signed autographs after the ceremony, with fans able to challenge them in games of hockey, volleyball and football.

Afterwards some headed for schools and rest homes to visit people who could not get to the ceremony.