The Department of Conservation says three new lakes have been created by Mount Tongariro's eruption on Monday night.

The weather improved enough on Wednesday morning for a helicopter carrying a team of scientists to fly over Te Maari craters for the first time since the eruption.

DoC's Nic Peet says a stream that flows from the crater has been dammed by material from the volcano, forming three new lakes.

He says heavy rain may cause the lakes to overflow and for water to head down the mountain. 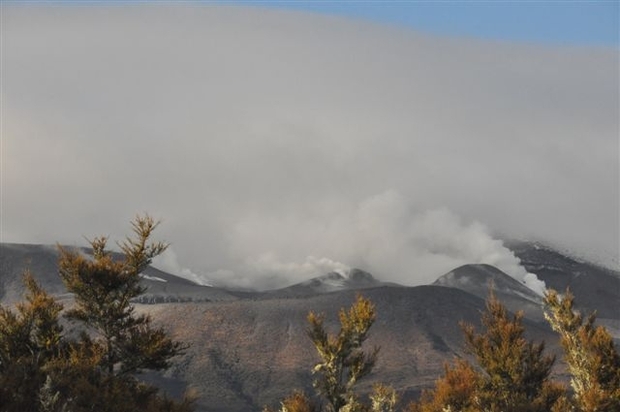 Steam billowing from the Te Maari area, as seen from the base of the Alpine Crossing. Photo: RNZ

But it is estimated there is only up to 10,000 cubic metres of water that is dammed, which is smaller than the crater lake atop Mount Ruapehu.

GNS Science says there was also a debris flow streaming 2 km from the crater that destroyed everything in its path.

No further volcanic activity has been noted on Mt Tongariro but steam is still billowing from the Te Maari craters that erupted on Monday night, and authorities remain on alert.

Reporting from the base of the mountain on Wednesday morning, a Radio New Zealand reporter said steam was pouring from vents around the craters about one and a half kilometres from Ketetahi Hut.

GNS Science says three new vents formed in the eruption. One is thought to be at the northern end of the mountain peak and two are close together at the southern end.

Tape and traffic cones are blocking access to the Ketetahi carpark, as the Tongariro Alpine Crossing is currently closed, as are four huts on the mountain.

Weather conditions improved enough on Wednesday morning to allow an observation flight to go up and give scientists their first proper look at the mountain since the eruption: low cloud had prevented earlier efforts.

GNS Science vulcanologist Craig Miller says they hope to gather data that can be compared to data in recorded before the eruption.

He says a vehicle on the road below the mountain will also be taking readings from the plume of steam coming off Tongariro to measure the concentration of gas and what type of gases they are.

The official threat warning was lifted on Tuesday afternoon, but the mountain is still steaming and scientists say it could erupt again at any time with little or no warning.