A prominent Otago conservationist says he has a group ready to remove a Landcorp forest plantation between two protected high country parks.

The state-owned farming company is under mounting pressure to remove the 190ha forest block planted at Waipori Station near Dunedin.

The block Landcorp chose for the plantation of Douglas firs borders Te Papanui Conservation Park and the Stony Creek Scenic Reserve and is rated at a high risk of spreading. 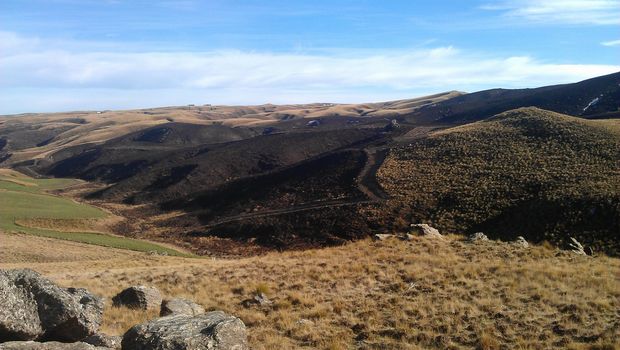 Burned tussock for the plantation next to Te Papanui Conservation Park. Photo: RNZ

Otago University ecology professor Sir Alan Mark says the forest is a mistake and an insult to the volunteers who have removed 200,000 wilding trees from the region.

Sir Alan says he might lead a group to the site to remove the trees if Landcorp will not.

Landcorp national business manager Graeme Mulligan says the plantation does pose a significant risk, but promises the company will stop the trees spreading.

"We will do whatever we need to do to ensure that we do not have a spread of Douglas fir wilding pines moving on to DOC (land)."

Mr Mulligan says the company had to plant the Waipori block because it faces a $13 million bill under climate change rules unless it puts in 17,000 hectares of carbon forest nationally.

Landcorp says it has heard the objectors clearly and has put plans for another 300 hectares of trees on hold while Otago authorities review the rules for future plantings.