The Crown says the death of a 10-year-old Christchurch girl five years ago was the result of a forceful sexual attack by her uncle.

Charlene Makaza died in January 2007. Her uncle, George Evans Gwaze, 60, is being retried on charges of sexual violation and murder. 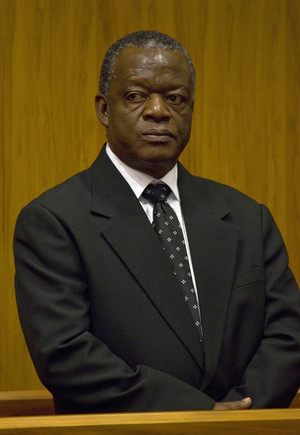 George Gwaze at court on Monday. Photo: POOL / THE PRESS

He said medical staff described the injuries as striking, abnormal and consistent with blunt force trauma.

Mr Stanaway told the court the girl's breathing had also been interfered with and that the accused's DNA was found in her underwear.

"The accused's DNA was also recovered from the white skirt Charlene was wearing and the bottom bed sheet on which she had been lying. They are important pieces of evidence, the Crown says, pointing to the accused's guilt."

However, defence lawyer Jonathon Eaton told the jury all the symptoms the girl presented with were a consequence of her having HIV.

"Charlene was riddled with HIV - it was at a level which of itself could explain her death. She had no ability to fight infection. She was not assaulted at all.

"She died from an overwhelming infection or toxic shock - something she was prone to, having regard with the HIV within her body."

Mr Eaton said the DNA found in her underwear was a tiny amount that could be expected if household clothing was laundered together.

Earlier, Justice French told the jury the fact this is a retrial is irrelevant. She urged jurors not to search the internet for information relating to the case and to keep an open mind.

The judge warned that some evidence is likely to be distressing. The trial is set down about a month.