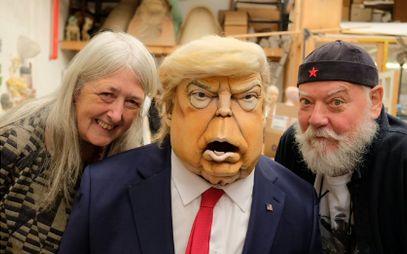 New episodes of the comedy, described as "public service satire" by co-creator Roger Law, will take on Donald Trump and Vladimir Putin, among others.

"It's pretty chaotic out there. As far as I'm concerned, it's better than shouting at the television set," he told The Guardian.

A pilot for the resurrected show has already been filmed, Mr Law added.

The pilot will also feature the Duchess of Sussex wearing a glittery top with the word "Princess" printed on the front.

Unlike its 1980s heyday, Mr Law said the new series would not focus on the lower ranks of British politics, explaining: "It's an awful lot of trouble to go to, and you want it to be effective."

He told the paper the show's producers are in talks with US-based networks about bringing the show to a wider global audience.

The caricaturist first told BBC Two's Front Row on Friday that he planned to bring the show back.

Mr Law told the cultural discussion show's host, Mary Beard, anybody in the public eye would be "fair game" for the Spitting Image satirical treatment.

On #FrontRowLate tonight, @wmarybeard speaks exclusively to Roger Law, as he films a pilot in the UK for the new Spitting Image series coming to American TV. pic.twitter.com/JFuX5dHCEU

He admitted to The Guardian satirising President Trump offered a challenge "because he's a satire in himself", but said puppets allowed them to go further than actors could.

Impressionist Luke Kempner confirmed his involvement in the show, writing on Twitter: "This is my latest project I've been working on!! So exciting and a true honour!! Watch this space!"

Caricaturist Adrian Teal said he has been working on the show's puppet designs to bring the "TV satire juggernaut" back to screens, tweeting: "Well, it's official!"

Broadcast on ITV from 1984 to 1996, the often-controversial programme parodied political leaders, celebrities and royals across 18 series.

After the topical show ended, Mr Law worked as a fine artist and in 2018 donated his entire Spitting Image collection to Cambridge University.

The archive, which is held in the university's library, includes original scripts, puppet moulds, drawings and recordings.

Much of Margaret Thatcher's Cabinet was parodied, with Douglas Hurd depicted with "Mr Whippy ice cream" hair, and her successor John Major caricatured as a dull, grey puppet with a penchant for peas

The series was axed in 1996 because of declining audience numbers.