A bleach promoted by a New Zealand website as a "miracle" cure for Covid-19 that should be drunk or inhaled is a potent acid that can rust steel within hours.

In May, RNZ revealed Ngatea man Roger Blake, who is involved with a cult-like American organisation called Genesis II, was selling the chemicals through his online business, and claimed they could cure Covid-19 as well as cancer, HIV, autism and more.

A separate website called Miracle Mineral NZ, which was linked to Blake's Ngatea address, encouraged people to buy the chemicals - sodium chlorite and hydrochloric acid - combine them, then inhale the gas emitted.

Alternatively, the website advised people to dilute a small amount of the chemical with water and drink it eight times a day for a week.

Forensic scientist Dr Ian Calhaem, who tested the product for RNZ, found that when prepared as instructed on the Miracle Mineral website, the substance was acidic enough to rust a steel bar within two hours of being immersed in the liquid.

When asked if he would drink the substance, Dr Calhaem said "definitely not". He told RNZ that the sodium chlorite sold by Blake was a "powerful oxidiser".

"If you read all the manufacturer's safety data sheets, one of the major things they say [about sodium chlorite] is 'do not mix it with acid'."

Dr Calhaem said combining sodium chlorite with hydrochloric acid, as instructed on the Miracle Mineral NZ website, was not recommended because it produced a "very toxic gas" - chlorine dioxide, which he said then broke down into chlorine gas.

"It creates a severe respiratory reaction. It can kill you." 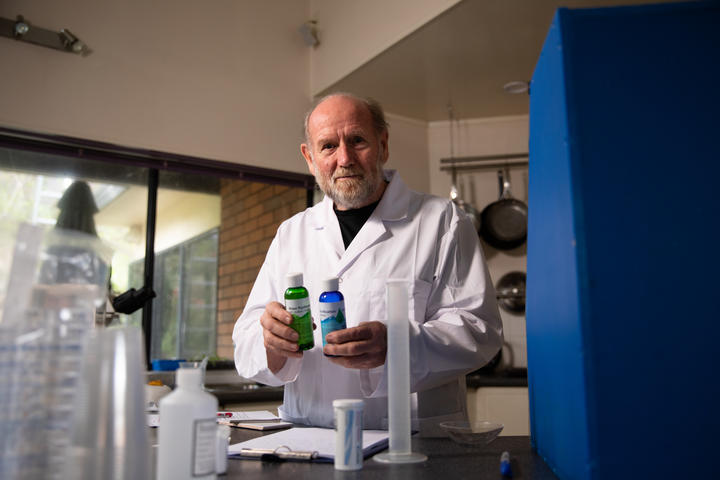 When used that way in New Zealand, the maximum concentration allowed by the Ministry of Health was 0.8 parts per million. Roger Blake told RNZ he drank it at a concentration of 50ppm. The solution Dr Calhaem prepared as per instructions, which rusted steel, was about 12ppm.

The chemical was also used in some countries to clean fresh produce. After treatment, the produce must be rinsed with drinking water, and must not be consumed within 24 hours of treatment.

After RNZ revealed bleach was being promoted as a Covid-19 cure in New Zealand, the Ministry of Health's safety watchdog, Medsafe, published an alert, warning consumers of the "potentially life-threatening side effects" of drinking chlorine dioxide.

Medsafe has put out multiple warnings about the sale of the product in New Zealand since 2010.

Dr Calhaem reiterated that people should not drink or even handle the substance without the correct protection - including gloves, safety glasses and a breathing mask.

He said there was no evidence the bleach could cure Covid-19.

"I have been researching for my work a number of chemicals that are disinfectants... To my knowledge - and this is after extensive research - nobody in the world has tested anything actually against the Covid-19 virus at the moment."

Dr Calhaem said some disinfectants had been tested against other types of coronavirus, including SARS and MERS, but no one could say for certain they would kill SARS-CoV-2, the virus that causes Covid-19.

The penalty for advertising an unapproved medicine is a fine of up to $200,000 or up to six months imprisonment. Medsafe would not say whether it was investigating the claims made on the Miracle Mineral NZ website. 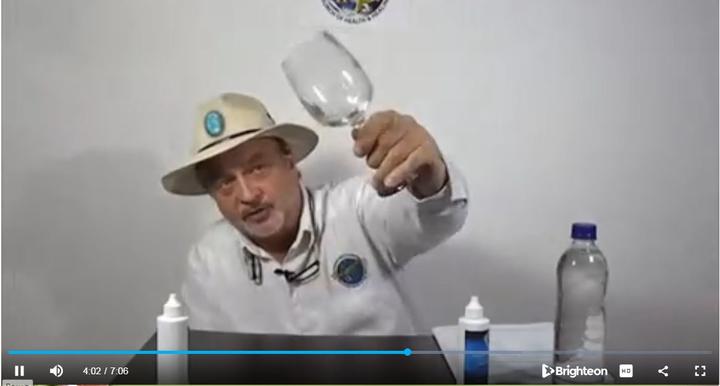 Roger Blake did not respond to RNZ's interview requests for this article, but he continues to promote the chemical's efficacy.

A recent email sent to customers of his online business claimed, "whether it be Coronavirus, Hepatitis, Ebola, Zika; it is a scientific fact that NO virus can withstand chlorine dioxide; and it has already been tested effective against Coronavirus."

The email contained links to various websites, including an anti-vaccination documentary, far-right American conspiracy theory and fake news sites and to the film Plandemic, which claims a secret society of billionaires is plotting to gain global domination by controlling people through a Covid-19 vaccine.

Another email sent to Blake's customers linked readers to information about a "quasi-experimental" Colombia-based study sponsored by the "Genesis Foundation", where 20 people with Covid-19 drank a litre of diluted bleach daily for an unknown period of time.

Since RNZ revealed Blake was promoting the chemical as a cure for Covid-19, some minor changes have been made to the Miracle Mineral NZ website.

Medical researcher Dr Shaun Holt told RNZ that people who sold the solution both in New Zealand and overseas often played a "cat and mouse game" with authorities.

"They'll make claims illegally and then they'll try and hide them, or they'll make implied claims, they'll change the name of the product, or change the formulation slightly... it keeps cropping up."

In a 2015 Stuff article, Blake is pictured with a bottle labelled 'MMS Water'. The products he currently sells are labelled as 'Water Purification Solution'.

Blake has recently stopped selling dimethyl sulfoxide (DMSO) online. The solvent byproduct of the wood pulp making process has been touted in the past as an alternative cancer treatment.

The Miracle Mineral NZ website advised users to take DMSO orally or through the skin.

The Genesis II Church of Health and Healing originated in Florida and is not religious; its sole function is to promote the use of the chlorine dioxide bleach formula that it calls Miracle Mineral Supplement, or MMS, which its followers also sell.

To become a 'bishop' of the church - a title held by Roger Blake - one can download a $320 video course, and must provide two video testimonials of people who have been 'treated' with chlorine dioxide.

In May, Blake told RNZ that "dozens of studies" showed chlorine dioxide was safe for human consumption.

The Medsafe alert said it was "not aware of any research carried out to assess the quality and efficacy of these products."

He said anyone with concerns about exposure to the substance should call the Poisons Centre on 0800 764 766.