A week ago, Shaun Hendy packed up a desktop computer and monitor at his University of Auckland office and carted the whole lot home to his Grey Lynn bungalow. 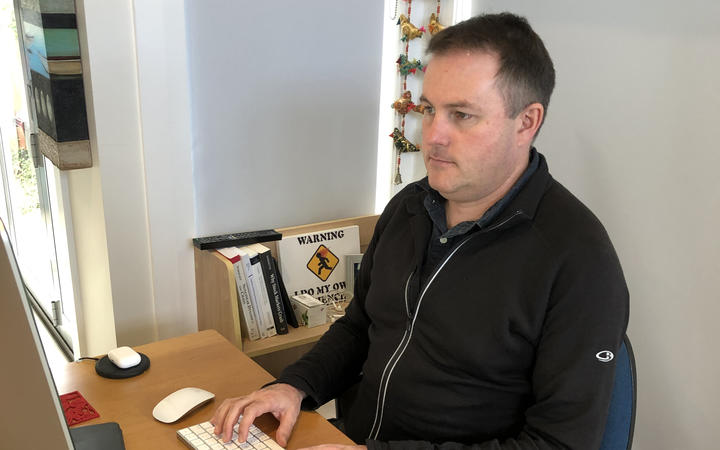 When you're leading the team that's modelling the worst-case scenarios for how Covid-19 might spread in New Zealand, you don't wait for a government directive to stay home: you follow your own advice.

"Once we realised that this work was probably going to be really critical, and having a little bit of an insight into what was coming, we moved people home last week."

The study was already occupied by Hendy's wife, a lawyer, who needed somewhere to keep confidential client files. So Hendy works at the kitchen table, back turned to the garden outside, with last night's dishes and occasional visits from the neighbour's allergy-provoking cats as mild distractions. Mostly though, he is intent on the three screens arranged before him: desktop, laptop, iPad.

Te Pūnaha Matatini, the centre for research excellence that Hendy leads, studies complex systems and networks. Right now, he and the centre's other researchers are working to predict how Covid-19's web of infection might spread - and if it's possible to slow it down or even stop it.

Read more: What the modelling predicts

His colleague, microbiologist Siouxsie Wiles (who has now become one of the foremost science communicators during the outbreak), was first to take notice of the virus when it began to run rampant in parts of China. "She was watching it nervously back in January, so we were kind of aware of it."

About a month ago, Hendy himself decided to do a little bit of preliminary modelling. "That told me it was gonna be bad… And so at that point we decided we should really start building a project team to refine the type of modelling I was doing."

A pair of Christchurch colleagues who were on sabbatical began working full-time on the model almost immediately and the team has expanded since then to about 20 people, mostly in Auckland and Christchurch.

The initial modelling the team published yesterday is stark and, frankly, terrifying.

Left unchecked, the virus would eventually infect 89 percent of New Zealand's population and kill up to 80,000 people in a worst-case scenario.

ICU beds would reach capacity within two months and the number of patients needing intensive care would exceed 10 times that capacity by the time the virus peaked.

"Tens of thousands of people would die, our health system would collapse and people wouldn't be able to get proper treatment. That explains why the government's been prepared to take such drastic steps," Hendy says. "The worst-case scenario is a really unpalatable one."

Even the best-case scenario is hard to swallow. It assumes restrictions similar to the lockdown now in place - but suggests that unless testing, contact tracing, and isolation cut the number of cases to just a handful, the restrictions might need to remain in place for over a year.

And if the cases can't be stamped out under those restrictions, the eventual peak will swell well beyond hospital capacity as soon as any lockdown ends, unless a vaccine or treatment is found in the interim.

"When controls are lifted after 400 days, an outbreak occurs with a similar peak size as for an uncontrolled epidemic," Hendy and his colleagues wrote in a paper rushed out yesterday. "In other words, these strategies can delay but not prevent the epidemic."

The good news - if there is any - is that while strict suppression measures remain in place, fatalities should remain in the low dozens and hospital capacity wouldn't be exceeded. That would buy New Zealand time to wait for a vaccine or a successful treatment.

That research was given to the government last week as it grappled with how to respond to the pandemic. The team's best-case scenario - strong suppression - is essentially what the government has gone with, Hendy says. "One of the great things about going into lockdown now is it really does make the job easier for the contact tracing and the testing… If that works and we can stamp out the disease, then we really might only see a handful of deaths and be able to keep this thing out. It still means we're going to have international travel restrictions for a long time, because the disease is out of control internationally and we're going to have to keep it out."

After three weeks of working autonomously, the team's interaction with government officials is about to ramp up. "We've now got a connection with the national crisis management centre, who are acting as a clearing-house - so... we'll actually be sending them daily modelling reports."

Hendy's hopeful that might mean some funding to keep the work going. He's already repurposed Te Punaha Matatini's now-unnecessary travel budget to pay the PhD and post-doctoral students he's drafted in to help. "Eventually we're gonna burn through that and we'll need to get money from central government to keep the effort going, but we've been able to be flexible and actually make a start."

While the initial research has only just been made public, Hendy's team has already moved on to the next phase. That includes a regional model to assess the variable impact of Covid-19 around the country and variations to see what happens if restrictions are lifted after a period of time. "We look at what happens if you take controls on and off," Hendy says. "Can you put your foot on the brake for a while and then take it off and let everybody have a breather?"

In unprecedented conditions, the team is drawing on whatever past experience it can. Among Hendy's colleagues are researchers who worked on modelling and controlling the Mycoplasma bovis outbreak in cattle, and the 2015 Queensland fruit fly scare in Grey Lynn, Auckland - coincidentally, the suburb Hendy lives in - where restrictions on the movement of fruit and vegetables were put in place.

Three years ago, Hendy and others carried out a study to see if they could predict the spread of seasonal flu by looking at aggregated location data from mobile phones, to track the movement of people from one DHB area to another. "On a given day, how many people went from MidCentral to Capital & Coast, for example? And that was enough for us to say something useful about how the flu moved around the country." Now, they're hoping to do the same for Covid-19, but at a suburb-to-suburb level. "We ought to see a big reduction in people moving round… and that'll start to give us a good handle on how well we're combating the disease."

The kitchen table Ground Zero for New Zealand's Covid-19 modelling isn't foolproof. "I had my first big hiccup this morning when someone from central government emailed me a whole bunch of Excel spreadsheets. My email client crashed and I was out of action for about ten minutes," Hendy says.

Mostly things have gone smoothly. They use Zoom, they use Slack, there's some sharing of code. If they need it, there's high-performance cloud storage available to them. "It actually helps that a lot of our people have worked together before…. We've got used to working remotely together so you can work quite efficiently."

For the next little while, though, the model will be "a little bit rudimentary".

"It's the first time we've ever done anything like this in New Zealand so there's a lot of guesswork involved," he says. "Every day we're rebuilding the engine under the hood."