Fire crews would struggle to access water to fight blazes after a large earthquake in Wellington.

Firefighters would be stopped from using the city's reservoirs because they would be needed for drinking water.

There would be a significant risk of fire in the capital post-earthquake, because of its strong winds, steep slopes and old infrastructure, a new GNS report released to RNZ found.

Now, Wellington's top agencies are trying to come up with alternative ways to fight a potential post-quake inferno.

One of their ideas is to ask the public to help by keeping fire extinguishers in their homes.

Other ideas include storing portable water in the city, and buying equipment to pump water from the ocean.

Regional manager of Wellington Region Emergency Management Office (WREMO), Jeremy Holmes, said the Kaikoura earthquake was a timely reminder for Wellington "that we are not as prepared as we need to be".

GNS rates the risk of the Wellington fault rupturing to produce a 7.5 magnitude earthquake in the next century at about 10 percent.

As part of its ongoing work, the crown institute, which has also looked at the risk of tsunamis or landslides, is focusing on the dangers of a large fire, or several large fires, after a quake.

The GNS report models the risk of fire post-quake and finds "Wellington city has… the potential for conflagrations and significant losses (eg property, infrastructure and casualties)".

In 1931, the Hawke's Bay quake led to central Napier being decimated by fire.

"The last significant fire internationally was after the Kobe quake in Japan in 1995, which had thousands of buildings burn down, but there have been tons of earthquakes since then without fires, including Christchurch," said GNS risk specialist Finn Scheele.

"But Wellington city has lots of closely spaced wooden buildings, and it's also windy - often the fan for fire - and a windy day makes it a far higher risk."

The city is also reliant on ageing reticulated gas pipes and electrical networks, and has lots of vegetation close to densely populated areas.

These would be significant challenges for firefighters. 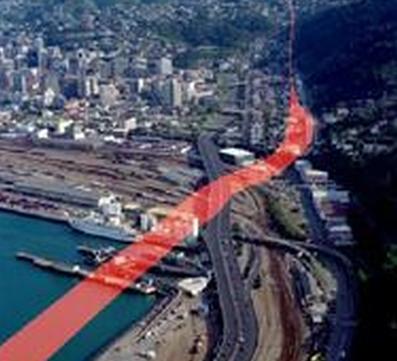 After a major quake, Wellington Water would isolate the city's reservoirs, which would be prioritised for drinking water. The bulk of the water in the region comes from its reservoirs, and flows through many pipes that are old and likely to be damaged in a quake.

Fire and Emergency region manager Bruce Stubbs wanted to assure people that there should be some water available for fighting fires, but supply was an issue that needed to be better planned for.

"We do have a range of options," said Stubbs. "But we're thinking about where water tanks are, where storage facilities are right now, how you get to them, and whether we might want to keep them for other uses rather than firefighting."

Fire and Emergency recently investigated the possibility of investing in equipment that would allow firefighters to pump water from the ocean, but there was a disagreement with the government regarding which agency would provide the funding.

Stubbs said pumping equipment was a potential solution, but it wasn't perfect as it still required good access to the ocean through the city's streets, and may not be usable in suburbs further away from the water.

GNS' Finn Scheele said Wellington's geography provided another potential problem. "We often talk about the concept of 'islands,' which means that because of Wellington's geography, if significant access roads are out of action, that might cut off whole communities - for example, Miramar and Karori might become 'islands'," he said.

But these were issues the city's top agencies were trying to solve. Last year, a working group was formed that included Fire and Emergency, WREMO, the city council and the Department of the Prime Minister and Cabinet.

Holmes said there needed to be creative thinking. "For example, in Europe some countries have water supplies under roundabouts. Perhaps we need more volunteers ready to be called upon?"

He said to stop fires from igniting, agencies were having to rethink what advice they gave people.

"Traditionally, we've always discouraged people from fighting fires, but perhaps it may be appropriate to encourage people to think about dealing with small fires. That might mean fire extinguishers in their homes."