As New Zealand's population nears five million, our demographics have changed - but what about our perceptions of who the 'average' Kiwi is? Do they exist, or were they always a myth?

Behold the average New Zealander, according to Johanna Cosgrove: "It's like, Fred Dagg, Number 8 wire, All Blacks, toxic masculinity, whiteness… It's an old white man, pot belly, hat, black singlet, gumboots, stubbies, can of Speight's, drives a truck, has a dog, says bugger a lot ... and has an unseen partner who makes all the food."

That description of an archetypal Kiwi, which she delivers rapid-fire on a central Auckland footpath, is also "grossly inaccurate", she says. "It's cooked cos it's not true."

It's a deeply-ingrained image, though.

"Kind of a man alone, keeps his ideas to himself, unexpressive but can get a job done, in a dour way," Grant MacIntosh says.

Cajole Anna Miles to describe the archetype, and she laughs: "A hairy man!" What's he doing? "Working on the land, man… Climbing, tramping." What she calls the "Fred Dagg mythology" is part of her childhood. "I suppose that's what you reflect on when you get asked something crazy like this."

If it's a myth, crazy, a cooked idea, then what's the truth? Who is the 'average' New Zealander politicians are thinking of when they conjure them in speeches, election promises, policies?

Every five years, the New Zealand Census asks us to tell the statisticians who we are. Surely, from all that data, it must be possible to glean an idea of what an 'average' New Zealander truly looks like now, as the population heads towards 5 million?

So RNZ did just that, analysing the most common answers to questions from the 2018 Census - known in statistical language as the mode. In other words: for each question, who is the dominant group of people? Women outnumber men, just (the Census doesn't have a gender-diverse response, yet). The most common ethnicity is Pākehā. More people live in Auckland than any other place in New Zealand - and so on.

Putting together all those most common answers, it's possible to piece together who that 'normal' New Zealander might be. She is Pākehā, about 37, was born in New Zealand and lives in Auckland, with a partner or spouse in a house they own. She drives a car most days to her full-time job. Her highest qualification is high school, she doesn't smoke, and she doesn't believe in any kind of god. She most likely doesn't have children, but if she does, she's got two.

She's changed a little since the 2013 Census - back then, she was renting, and she appears to have given up religion in the intervening five years.

But does she actually exist?

The Census divides New Zealand into tiny neighbourhood units called meshblocks, which each contain a few dozen houses and 100 to 200 people. Wading through all that data, there's only a handful of the 40,000 or so meshblocks in New Zealand that ticked all those 'average' boxes in 2013.

Once household data is added in - phone and internet access, number of bedrooms - there is just one meshblock in Auckland that makes the cut: a tiny chunk of Hillcrest, on Auckland's North Shore.

Read more from this series

Hillcrest is heartland suburbia. The houses are a jumble of easy-going 1960s and '70s architecture: two-storey weatherboard and brick, wide picture windows, inbuilt double garages, neat front lawns sloping down to the footpath, and only the occasional low fence.

RNZ went door-knocking. We showed the list to every household in the meshblock but no one quite matched the description - until Geoff Grant opened the door. Geoff wasn't the unicorn (too male, too British), but he had a wife who he thought might come close.

So meet Melissa Grant: born in Whangarei, married for 10 years with two sons aged 5 and 8. She was brought up Anglican but is "on the fence" these days, has never smoked, and each day she drives the family car to the primary school where her two sons are pupils and she's a teacher.

The only answers that separate her out are age (at 43, she's just a tad older than the median) and her education - she has both a degree and a teaching diploma. 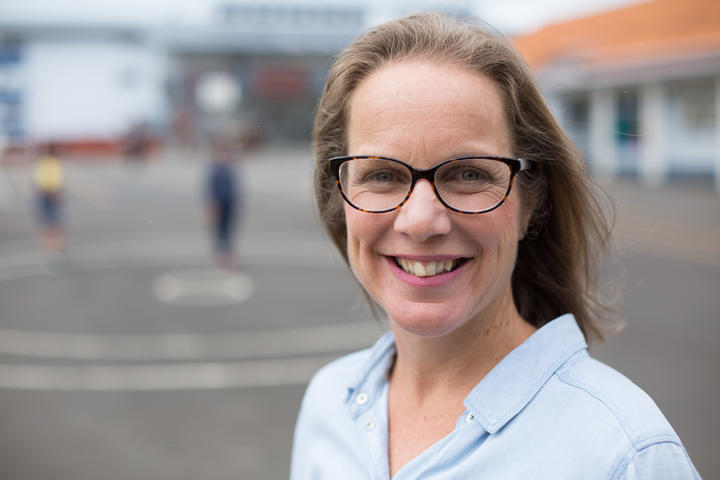 She doesn't mind the 'average' label. "That's quite cool.... Because I'm very passionate about being a Kiwi and that's quite important to me. So average isn't a derogatory term whatsoever. I saw it as a compliment that some of the things that I've done in my life make me a good old average Kiwi."

The thing that does concern her is who that narrow definition of average - which even she doesn't quite fit - leaves out. She's particularly worried about the question of ethnicity. "What about all the other culturally diverse people in our country that will consider themselves New Zealanders as well?"

The other problem - emphasised by how difficult it is to find even one person - is that while each 'normal' answer might be statistically likely on its own, combined they create a statistically improbable scenario. Even finding an area that fits the bill is nearly impossible once the answers are all combined - and it's also been getting progressively harder as New Zealand becomes more diverse and the common answers become, well, less common.

Using the answers to 10 questions asked across the 2001, 2006 and 2013 censuses, plus the median age and median income for each of those years, the number of meshblocks that meet all those criteria has dropped dramatically over time.

So if no person and no place really fits the picture, where can average New Zealand be found?

There's another way to define how 'normal' each meshblock is - by comparing it to how New Zealand looks overall. If you took New Zealand and shrank it down to a single meshblock, you'd get something a little like this section of St Andrews in Hamilton.

The population of this meshblock, which is bounded by Taylor Terrace, Vardon Road, Heath Street and Hilton Road, is 74 percent Pākehā, 15 percent Māori, 13 percent Asian ethnicities and 6 percent Pasifika. The median age is 36 (just a little younger than the national median), and education, home-ownership and employment levels are in line with national figures. Two-thirds of people drive to work (tick), just over half of them have some kind of religious belief (tick) and three in five have never regularly smoked (tick).

The only real outlier is the area's median personal income, which was $36,700 in 2013 - a bit higher than the national figure. Other than that, it's New Zealand in miniature. 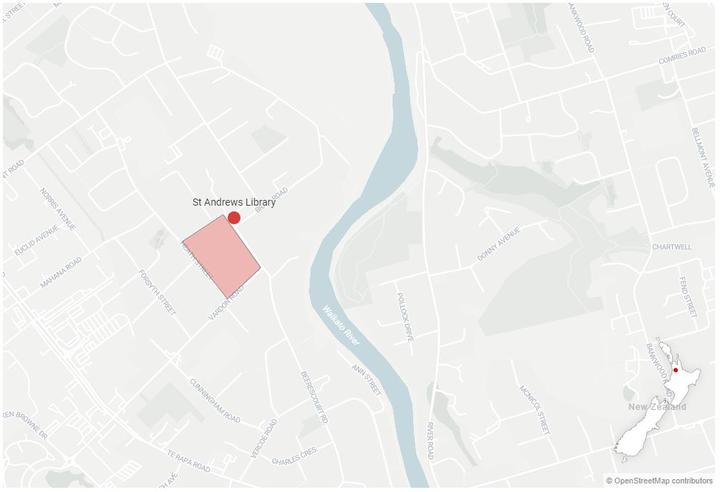 St Andrews Library is just outside the meshblock boundary, on the north-east corner. In her 21 years as a librarian there, Kathy Fam has seen the surrounding area slowly change. There have always been people from Pākehā, Māori and Pasifika backgrounds, she says, but they've been complemented by more recent arrivals - people who have emigrated from India, Korea, Somalia.

"There's certainly a very good mix of people, from retired people to newcomers with young families that have just bought into the area, to different socio-economic groups and the different ethnicities now that we see," Fam says.

The increasing multiculturalism of the area is reflected even in what happens at the library. "Quite recently, we had a Somalian girl working for us who did a lovely display and event for the end of Ramadan because that was really personal to her... And Maori language week, Chinese New Year, we try and incorporate those into our displays and our programmes where we can."

New in-fill housing may also help to increase and shape the population in coming years, she says. "It's going to change a little bit, even maybe the demographics, when you get younger couples coming in with no children, or first-time homebuyers going into more unit-type or apartment-type housing. It's going to be a denser population in the next few years." 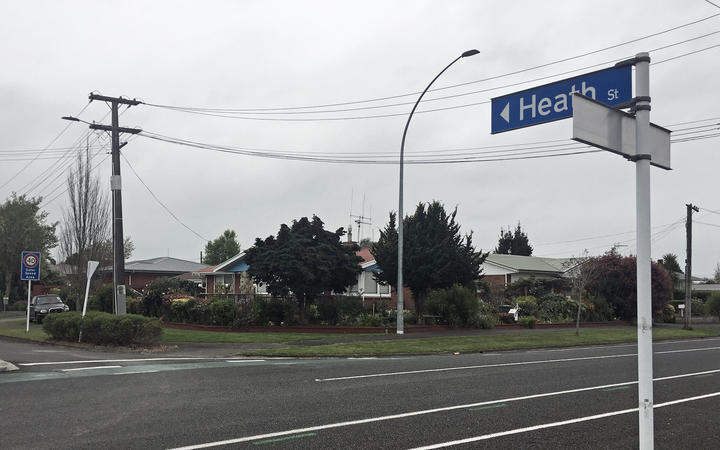 People who've lived in the area for decades still drop by the library. "Our older folk we've known for [years]... It is quite a nice little community."

As for the average New Zealander, Fam isn't sure who they might be - but she hopes they have certain values. "Here's what I'd like to think - that as New Zealanders we are accepting of other cultures, and that we can cope with or accept that other people don't necessarily see things the same way that we do. It doesn't mean to say they're wrong and it doesn't mean to say we're right."

In the end, both the statistics and the old mythologies are missing something, Melissa Grant says. "I would say most New Zealanders, regardless of their race, religion, abilities, their socio-economic status, people are about family and trying their best… And I don't know how you measure that."

Anna Miles says, at the very least, it's time to shake off the antiquated, colonial ideas of who measures up. "We've had this stereotype that has not been very urbane or urban. I'd hope that maybe the average New Zealander now does live in a city… We live in a really changing society and it's great."

For Johanna Cosgrove, there's no one type of New Zealander - whether they were born here or overseas, live in the city or the countryside. "I think anyone who lives here is a New Zealander if they choose to identify as that."

As a bus roars past on Karangahape Road, Troy leans in to hear the question. The average New Zealander, he says, is someone who knows their whakapapa. "Even if they're not Māori, they still know their whakapapa and where they stand in this whenua."

Then he carries on walking, merging back into the flow, one average New Zealander among the rest.