The green 'cross-now' symbol of a man at eight Wellington intersections has been swapped for an image of suffragist Kate Sheppard to encourage people to vote. 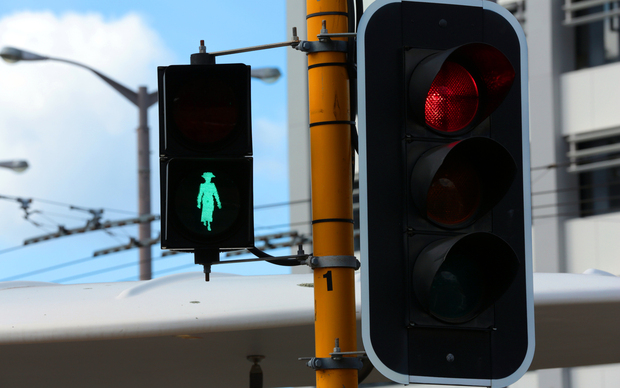 The swapping of the image at pedestrian lights around Parliament acknowledges the suffrage movement, which resulted in New Zealand becoming the first country to give women the vote in 1893.

Among the first to use one of the Kate Sheppard crossings was 18-year-old secondary school student Rosheen Leslie, who will cast her first vote in this year's election.

She said Kate Sheppard deserved to be recognised.

"She was the person who finally got the commonsense to give women the vote and spearheaded this campaign. I'm sure she means a lot to every New Zealand woman.

"Without her it would have either taken a long time or we'd be like many other countries and not have the same rights that women do here, so she means a massive amount to me."

Miss Leslie said even though women had the vote now, the battle for equality was not over.

"There is still a need for feminism in New Zealand and people are starting to realise that, especially with a lot of young celebrities coming through who are really pushing it like Beyonce at the Video Music Awards."

National Council of Women chief executive Sue McCabe said the light change was a great idea, but getting the vote was only the first step in gender equality.

"Much progress has been made since women got the vote in 1893, but statistics around women in the workplace and the levels of domestic violence against women show that more needs to be done to achieve the aim of the suffragists."

Ms McCabe said the council wanted voters to think about the issues around gender equality when they decide to vote, including the need to have more women in leadership roles and pay equality for both genders.

Wellington mayor Celia Wade-Brown said the most important task is getting people out to vote.

"It's our duty to vote. I think people fight really hard for democracy around the world, for women for Maori, for everybody to be able to have their participation in the three-year elections."

The mayor said changing the lights has been done overseas and there are plenty of opportunities to use the city's other signs creatively as well.