New Zealanders have been told to avoid feeding their babies a brand of infant formula called Nutricia Karicare, as a precaution, because it could cause the paralytic illness botulism. 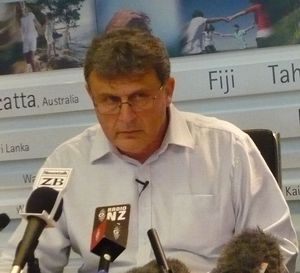 Dairy company Fonterra says the bacteria Clostridium Botulinum was found in three batches of its whey protein - a product used in many foods including baby formula and sports drinks.

The Ministry of Primary Industries has informed several foreign governments about the dangers of whey powder containing the potentially lethal strain of bacteria.

Acting director general of the Ministry of Primary Industries, Scott Gallagher, says the amount of product affected is considerable.

"The whey protein concentrate with the contamination came to around 40 metric tonnes. That has now found its way into a variety of products in terms of further manufacturing that comes to around 900 tonnes."

Mr Gallagher says he worries about several markets as well as New Zealand and has contacted his counterparts in Australia, China, Malaysia, Thailand, Saudi Arabia and Vietnam.

So far a specific warning has been issued only against the Nutricia product and no other produce has been identified.

But Fonterra's managing director of New Zealand milk products, Gary Romano, says there could be more.

"The ones that we are concerned about is infant formula, that has been made from this product, but we are also talking to customers that have bought this primary ingredient and finished products."

The whey protein affected was produced in May 2012 and the company says a dirty pipe at its Hautapu plant in Waikato was responsible for the contamination.

Botulism one of the most dangerous forms of food poisoning and can lead to paralysis that causes people to stop breathing.

The dairy firm said on Saturday most of the protein was sold to eight manufacturers to make their own products.

Fonterra refused to name the eight manufacturers or the countries they are based in, however chief executive Theo Spierings was travelling to China on Saturday to discuss the problem with authorities there.

There had been no reports of illness linked to the consumption of the affected product and fresh dairy products - including milk, cheese and yoghurt - had not been affected, the company said.

Fonterra said a product tested positive in March for Clostridium, which could have been one of a number of strains, most of which are harmless. Over the following months product samples were put through intensive testing, and on Wednesday tests indicated Clostridium Botulinum in a sample.

The particular whey protein concentrate concerned, WPC80, is used by Fonterra's customers in a range of products including infant formula, growing up milk powder and sports drinks.