Science teaching expert Michelle Dickinson says many vaccine-hesitant people she has spoken to decide to get a Covid-19 jab once their questions have been answered. 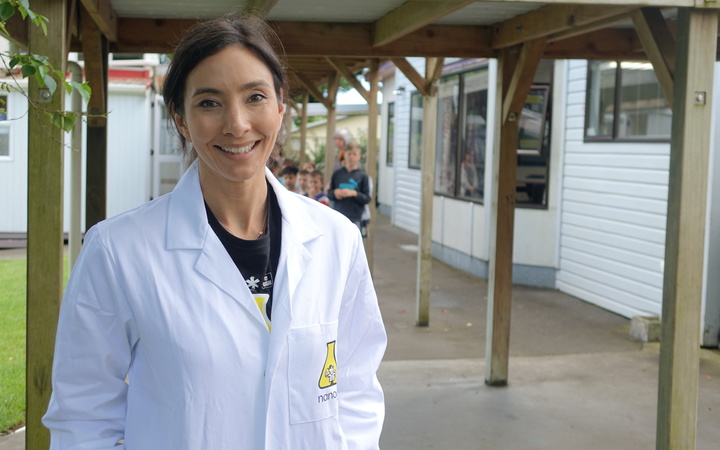 Michelle Dickinson, also known as Nanogirl, is running Q and A sessions for educators about the Covid-19 vaccine. Photo: RNZ / Robin Martin

Dickinson, also known as Nanogirl, has been running virtual Q and A sessions about the vaccine for teachers and school staff.

She told Morning Report those reluctant to be vaccinated needed to be presented with information about how the vaccines were made in a way that connected with them.

People often had particular concerns about the safety measures that had been undertaken during vaccine development, and wanted to better understand the process.

More than 600 educators attended Dickinson's first session yesterday and many of the questions submitted were from vaccine-hesitant people who she said "just wanted somebody to sit and talk to them about what [the vaccine] is, so they could make up their own mind".

Dickinson said a common reason for vaccine-hesitancy in New Zealand was a lack of understanding about how mRNA vaccines like the Pfizer one worked, with some people telling her they would prefer to wait for the non-mRNA Novavax vaccine.

"Because it (mRNA vaccine technology) sounds new, they feel like it hasn't been tested yet and therefore they don't want to be a guinea pig," she said.

"They don't think the safety testing has been done yet and therefore they'll wait for the old method - not understanding that the Novavax is actually still a new vaccine, it's just based on old technology."

Dickinson said once people were given information about the development and clinical trial process for the Pfizer vaccine in her workshops, they could compare it to the process followed for previous vaccines and see that the same steps had been followed, despite the shorter timeframe.

She noted people were asking questions because they were interested and just needed information so they could make decisions based on evidence.

"I've had many of those (vaccine-hesitant) people say afterwards in a message: 'Do you know what? That's exactly what I needed. Thank you for clarifying, I'm going to get my jab today.'"