Auckland prepares to move down an alert level as residents in more suburbs are asked to get tested, and an increase in infringement fees is nigh. 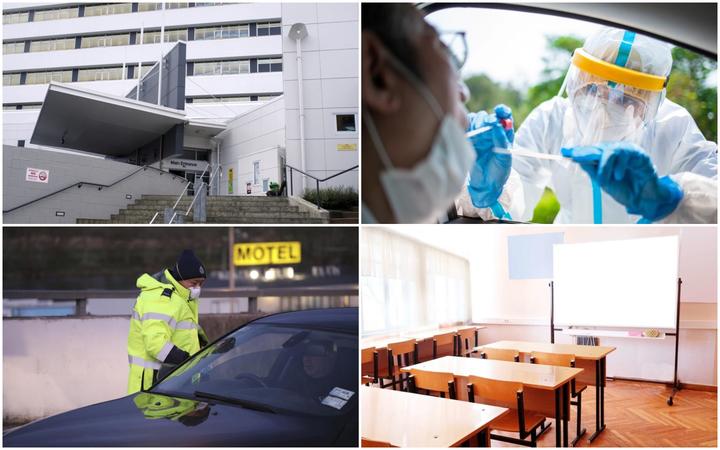 Upper Hauraki is designated to be in level 4 lockdown until Friday following the discovery of four community cases in the area, which are all connected.

The rest of New Zealand remains in alert level 2.

People in the suburbs of Mt Eden, Massey, Māngere, Favona, Papatoeotoe, Ōtara, Manurewa are asked to get tested if they have even mild symptoms.

Clover Park has been identified as an area of interest because a number of residents have tested positive.

Everyone living in the suburb is being asked to get tested, regardless of symptoms.

"Based on a set of cases that we have in Clover Park that we believe there is a geographical relationship between, we are asking everyone in Clover Park to be tested. This is a rigorous and cautious approach," Prime Minister Jacinda Ardern said.

A new pop up testing site has opened today at the Manukau Sports Bowl.

On-the-spot infringement notice fees were initially set at $300 for individuals but that will increase to $4000, and $12,000 for companies.

Fines imposed by courts will increase to a maximum of $12,000 for individuals and $15,000 for companies.

Covid-19 Response Minister Chris Hipkins said examples of infringement offences would include failure to wear a face-covering in places where it is mandatory.

The fine for criminal offending will increase from $4000 to $12,000 or six months imprisonment, with an additional fee of up to $15,000 introduced for companies.

Criminal offences could include travelling without permission, or travelling for a purpose other than what was permitted, from an alert level 4 or 3 area to alert level 2.

People will be able to travel across a boundary at alert level 3 for tangi, funerals, attend to or visit a dying relative, or accompany a tūpāpaku or deceased person.

It will be for immediate family only and people will need to have a negative test result 72 hours before travelling over the boundary. An application will need evidence of support.

Climate Change Minister James Shaw has defended the decision to go to the COP26 conference in Glasgow in November.

He and the returning delegation will be given special MIQ allocations upon their return - this will not affect the number of spaces available for emergency cases.

National Party Covid-19 spokesperson Chris Bishop is describing the new MIQ allocation system as both "depressing and a debacle".

More than 31,800 people tried to book the 3000 MIQ spots made available yesterday when the pause on new bookings was lifted.

From Wednesday morning, schools have to reopen for children under the age of 14 whose caregivers need to return to work and secondary schools can also seek permission to bring in small groups of older students.

Any secondary school students returning to the classroom under level 3 in Auckland will have to wear a mask indoors.

The government has announced an extra $38 million to ensure Māori health providers provide ongoing support to their communities in the Covid-19 response.

Associate Health Minister Peeni Henare says the money is on top of $23m announced early this month to help with the response.

Henare says Māori are one of the most at-risk communities for Covid-19 and vaccination rates for Māori are behind the general population.

He says Māori health providers know their communities and need to be funded to work with them.

There were 14 new community cases reported today, including one in Whakatīwai.

One of the cases is a man who snuck into North Shore Hosptial to visit a patient. The hospital has been examined and 20 staff have been stood down for testing after encountering the man.

There are now a total of 1085 cases in this outbreak, including 790 who have recovered.

Covid-19 around the world

From November, foreign travellers will be allowed into the US if they are fully vaccinated, provide a negative Covid-19 test result within three days of travelling, and their contact information. They will not be required to quarantine.

The current rules bar entry to most non-US citizens who have been in the UK and a number of other European countries, China, India, South Africa, Iran and Brazil within the last 14 days.

Pfizer Inc and BioNTech SE say their Covid-19 vaccine induces a robust immune response in five to 11-year-olds, and they plan to ask for regulatory authorisation as soon as possible to use the shot in children in that age range in the US, Europe and elsewhere.

Greece will make a Covid-19 booster vaccine available to doctors and other medical staff in the coming weeks.

India will resume exports of vaccines in the October quarter, prioritising the global vaccine-sharing platform Covax and neighbouring countries first as supplies rise.