The number of new community Covid-19 cases jumped to 82 today, while 25 people are in hospital with the virus including two who are in a stable condition in intensive care. 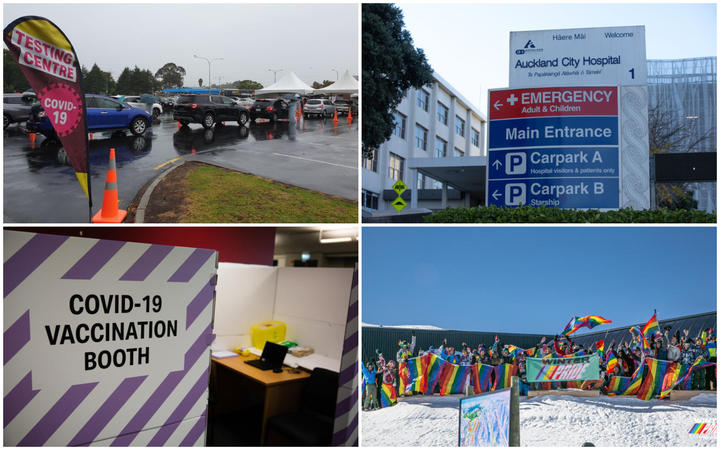 Government officials did not give a briefing today but in a release the Ministry of Health said that all of today's new cases were in Auckland bringing the total number of community Covid-19 cases there to 415, while another 14 cases are in Wellington.

The ministry said 376 cases have now been clearly epidemiologically linked to another case or sub-cluster, with another 53 for which links are yet to be fully established.

Of the 25 people who are in hospital due to community cases of Covid-19 one is in North Shore Hospital, 11 are in Middlemore Hospital, 12 are in Auckland City Hospital and one is in Wellington Regional Hospital.

Of the new cases, 62 are Pacific peoples, five are Asian, four are European, two are Māori, one is Middle Eastern/Latin American/African, and the ethnicity of eight is unknown.

Yesterday 89,316 vaccines were administered, the second biggest daily total to date. Of these 65,011 were first doses and 24,305 were second doses.

It takes the total number of doses given out to 3.2 million. Of that, 2.1m are first doses and more than 1.1m are second doses.

All patients in the dementia ward at Amberlea Home in Warkworth where a positive case worked two shifts while unknowingly infectious have been tested.

Of the 13 swabs taken, 12 have returned negative results, and the remaining one test is pending and expected today.

Public health officials understand the worker is fully vaccinated and adhered to strict level 4 infection prevention and control procedures including wearing face coverings and other PPE, the Health Ministry said.

The Health Ministry's Covid-19 update confirmed an error at a vaccination centre in Canterbury earlier this month that meant 13 people may have received a lower dose of Covid-19 vaccine than intended.

The ministry said no harm would have resulted from the incident.

Twelve of the 13 people have been contacted and booked in for another dose of the vaccine as a result, the ministry said.

The ministry said it is still trying to contact the remaining person who is booked in to receive their second dose.

The Health Ministry said such incidents were not common and it worked with the vaccination team to support their response to each person affected.

The vaccine provider will be making improvements and provide additional training for staff, it said.

Queenstown police said they were extremely disappointed to have found more than 50 people mountain biking on a track in Fernhill yesterday.

They were called to the park to assist with the rescue of a woman biker who had crashed. She was airlifted to Dunedin Hospital.

It took two hours, a four-wheel-drive and several police and ambulance staff to remove the injured biker from the park.

Police said they will be speaking to her at a later date and are considering taking enforcement action for breaching restrictions.

Police said since level 4 restrictions came into place, nationwide 93 people have been charged with a total of 99 offences as of 5pm 27 August.

Most of the arrests were the result of protest activity in the first few days of alert level 4, police said.

One of Queenstown's biggest festivals has been cancelled as a result of yesterday's lockdown announcement.

The 10-day Winter Pride festival had already been scaled back when the travel bubble with Australia was closed, and again when the lockdown was announced last week.

Organiser Martin King said he was still hoping to hold a four-day event, but yesterday's announcement means this is no longer possible.

He said he feels for the Queenstown businesses that will miss out on the associated income.