New South Wales has reported two new cases of Covid-19 in the community, while Victoria has reported one, and the infection of a cabin crew member in Brisbane has been traced back to her time in hotel quarantine. 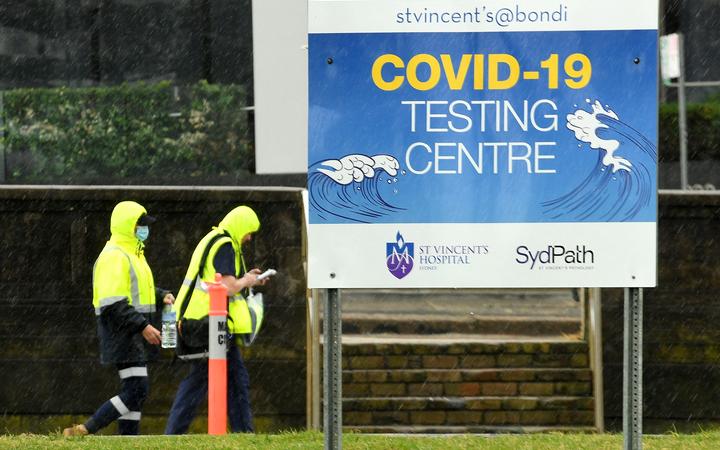 Medical officers walk past a sign board of Covid-19 testing center on Bondi Beach in Sydney on May 6, 2021. Photo: AFP / Saeed Khan

Both cases came in after yesterday's 8pm (Australia time) reporting cut-off and will be officially recorded in tomorrow's numbers.

One case is a woman in her 50s from Sydney's northern suburbs, who is a close contact of a previously reported case and has been in isolation.

The second case is a man in his 30s from Sydney's eastern suburbs. He is also a close contact of a previously reported case and has been in isolation.

The two new cases come a day after NSW Premier Gladys Berejiklian called for 40,000 people to be tested for coronavirus each day, in a bid to track and contain the growing outbreak in Sydney's east.

Victoria has recorded one new locally acquired coronavirus case, as Acting Premier James Merlino calls on the Commonwealth to urgently increase the state's Pfizer dose supply for the next two months.

Merlino said the new case was a resident of the outbreak-struck Southbank apartment complex and had been quarantining during their infectious period.

It is the fifth consecutive day the state has recorded one or fewer new local cases.

The pause on travel from Victoria to New Zealand is due to end tomorrow at 11.59pm.

Queensland case traced back to quarantine

A woman who tested positive to Covid-19 in Brisbane at the weekend, after spending time at a shopping centre and restaurant, contracted the virus while in hotel quarantine, Queensland Chief Health Officer Jeannette Young said.

The confirmation comes as the state recorded zero locally acquired cases today, while five were detected in hotel quarantine.

The woman had visited a Brisbane shopping centre, the CBD and a restaurant, sparking a major contact tracing effort.

Dr Young said the woman travelled from Portugal to Australia on an Emirates flight to go on to work as cabin crew for other airlines.

Dr Young said the woman had the B117 or "Alpha" variant of the virus.

"It is contagious but it's not as contagious as the Delta variant that we're now seeing circulate through parts of Sydney, so that is good news."

Dr Young said authorities were working to determine how the woman become infected from another person staying in hotel quarantine at the same time who was on a different floor.

"She acquired her infection from another cabin crew member who was in quarantine at the Four Points Hotel."

Dr Young said the woman had three tests in hotel quarantine on day zero, day five and day 12 - all of which returned negative results.