Brazil's brutal surge in Covid-19 deaths will soon surpass the worst of a record January wave in the United States, scientists forecast, with fatalities climbing for the first time above 4000 in a day on Tuesday as the outbreak overwhelms hospitals. 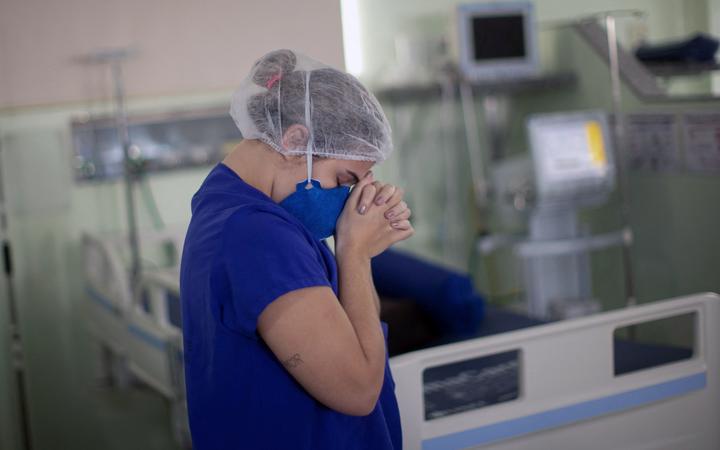 A nurse takes a moment to pray at a charity hospital in Belem, Para State, Brazil. Photo: AFP

Brazil's overall death toll trails only the US outbreak, with nearly 337,000 killed, according to Health Ministry data, compared with more than 555,000 dead in the United States.

With Brazil's healthcare system at the breaking point, the country could exceed total US deaths, despite having a population two-thirds that of the United States, two experts told Reuters.

"It's a nuclear reactor that has set off a chain reaction and is out of control. It's a biological Fukushima," said a Brazilian doctor and professor at Duke University, Miguel Nicolelis, who is closely tracking the virus.

On Tuesday, the Health Ministry reported another 4195 Covid-19 deaths in the past 24 hours, well above the country's prior single-day record. Brazil has set daily death records every week since late February, as a more contagious local variant and meagre social distancing efforts fuel an uncontrolled outbreak.

With mass vaccinations curtailing the US outbreak, Brazil has become the epicentre of the pandemic, contributing about one in four deaths per day globally, according to a Reuters analysis.

President Jair Bolsonaro has pushed back against mask-wearing and lockdowns that public health experts consider the best way to lessen virus transmission.

Speaking to supporters outside the presidential residence on Tuesday, he criticised quarantine measures and suggested without evidence that they were linked to obesity and depression. He did not comment on the 4195 deaths recorded in the past 24 hours. 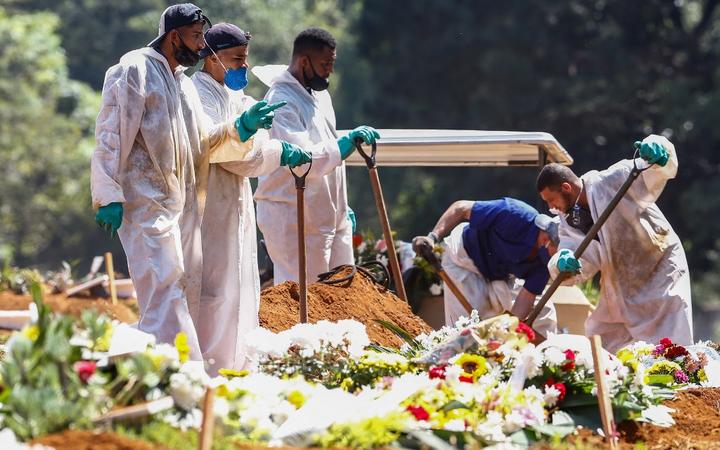 Workers prepare to bury the bodies of some Covid-19 victims in the cemetery of Vila Formosa in Sao Paulo. Photo: AFP

The country dragged its feet last year as the world raced to secure vaccines, slowing the launch of a national immunisation programme.

Despite the recent surge, Brazilian officials are insistent that the country can soon return to something resembling business as usual.

"We think that probably two, three months from now Brazil could be back to business," Economy Minister Paulo Guedes said during an online event on Tuesday.

"Of course, probably economic activity will take a drop but it will be much, much less than the drop we suffered last year ... and much, much shorter."

Bolsonaro has responded to growing political pressure with a dramatic shakeup of a half dozen ministries, putting loyalists in key roles ahead of what may be a tough re-election campaign next year against his political nemesis.

While the president has shifted his tone on immunisations, touting vaccines he had recently disdained, the far-right former army captain continues to battle in the courts against state and municipal restrictions on economic activity. 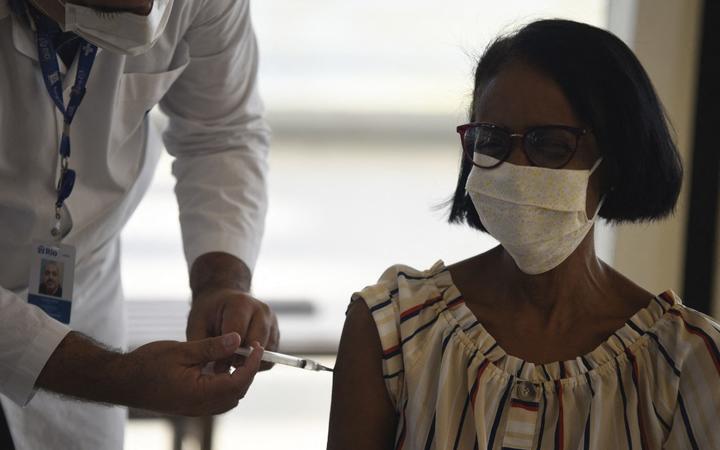 A woman is vaccinated in the capital, Rio de Janeiro. Photo: AFP

With weak measures failing to combat the contagion, Brazil's Covid-19 cases and deaths are accumulating faster than ever.

Nicolelis and Christovam Barcellos, a researcher at Brazilian medical institute Fiocruz, are separately forecasting that Brazil could surpass the United States in both overall deaths and the record for average deaths per day.

As soon as next week, Brazil may break the record US seven-day average for Covid-19 deaths, according to a model by the influential Institute for Health Metrics and Evaluation (IHME) at the University of Washington. The US average for daily deaths peaked at 3285 in January.

The IHME forecast does not extend beyond 1 July, when it projects Brazil could reach 563,000 deaths, compared with 609,000 total US fatalities expected by then.

In most states, patients with Covid-19 are occupying more than 90 percent of intensive care unit beds, according to the health institute Fiocruz.

Several states have reported short supplies of oxygen and sedatives. Despite the critical situation, some cities and states are already easing measures limiting the movement of people.

"Mayors and governors are politically prohibited from beefing up social distancing policies because they know supporters of the president, including business leaders, will sabotage it," he said.

Epidemiologist Ethel Maciel said the country was in a "dreadful situation", telling AFP news agency: "At the rate we're vaccinating... the only way to slow the extremely fast spread of the virus is an effective lockdown for at least 20 days."

What is the Brazil variant?

Fiocruz says it had detected 92 variants of coronavirus in the country, including the P1, or Brazil variant, which has become a cause for concern because it is thought to be much more contagious.

It is thought to have emerged in Amazonas state in November 2020, spreading quickly in the state capital Manaus, where it accounted for 73 percent of cases by January 2021, according to figures analysed by researchers in Brazil.

Experts fear the proliferation of the Brazil variant will mean increasing cases for several months.

The Brazil variant has also been linked to a spike in infections and deaths in a number of South American countries.