Chris Hipkins never expected to have the dubious honour of being the country's first and hopefully last minister of Covid-19 response. 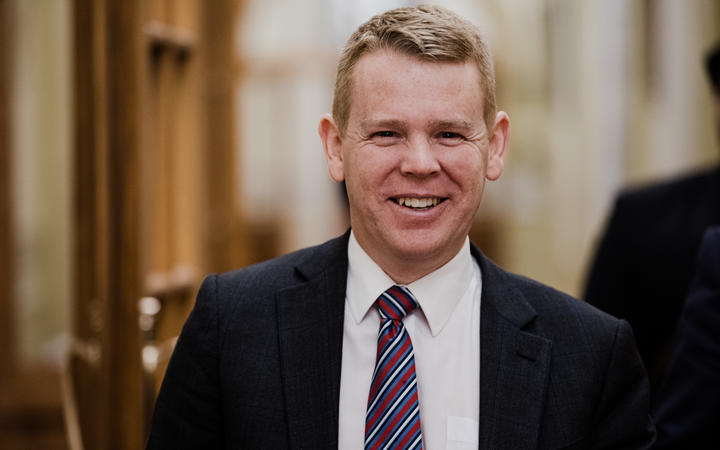 Chris Hipkins says taking on a new portfolio without a rule book is one of the biggest challenges. Photo: RNZ / Dom Thomas

The Remutaka MP, widely regarded as a safe pair of hands, took on the new portfolio as part of Prime Minister Jacinda Ardern's Cabinet shake-up.

He will likely be a familiar face, having fronted many 1pm press conferences with the director-general of health since taking over as the minister of health in July.

As the minister of Covid-19 response, he will continue to front those briefings; providing updates on cases, new rules and regulations, as well as encouraging people to get tested and to keep track of their movements.

Hipkins is a frequent user of the government's Covid-19 tracer app himself and admits the cafe at Parliament, Copperfields, is one of his most visited spots.

The Covid-19 response portfolio was the product of ongoing conversations between Ardern and Hipkins.

Hipkins said over the last six months he formed the view having one minister responsible for the Covid-19 response was the right thing to do.

"One of the risks for the minister of health with Covid-19 is that is, and has been, interrupting progress in other areas of health where we also need to be making good momentum, getting some good momentum moving," he said.

Ardern later asked Hipkins to take on the portfolio, as well as education which he held last term.

When he first picked up the health portfolio in July, Hipkins was asked if he would continue drinking a can of coke a day and consuming the occasional sausage roll.

Now he has relinquished the role, Hipkins appears to be slightly relieved his eating habits won't be scrutinised.

"Well I don't have to feel quite so guilty about it now, but at the end of the day we all have to take personal responsibility for our dietary choices," Hipkins said.

Hipkins is responsible for all aspects of the country's Covid-19 response, including border defence, managed isolation and quarantine, testing and contact tracing.

Taking on a new portfolio without a rule book was one of the biggest challenges, Hipkins said.

"We are learning as we go along and we have to continue to adapt," he said.

"I think one of the secrets here though is to be really open and honest with people about that. There will be areas where we look at something and say 'okay we need to make some change there because we need to do things better in that area.' When you're doing things for the first time that's always going to be the case and we've just got to be upfront about that."

Hipkins never expected to take on such a portfolio.

"It would be fair to say this wasn't something that I thought I'd be putting my hand up for when I ran for Parliament 12 years ago, but I guess you have to adapt to the challenges that are in front of you," Hipkins said.

"I think even a year ago none of us would have imagined we'd be doing this at the moment."

Hipkins' main portfolio priorities are keeping Covid-19 out of the country and transitioning New Zealand to life after the pandemic.

"Making sure that we get a vaccine, that we're in a position to be able to administer that as quickly as we possibly can and then preparing for the easing of restrictions at the point that we're able to do that," he said.

He defended the six times since May that Covid-19 has been picked up in the community, saying "there is no such thing as a 100 percent foolproof system when it comes to a virus."

When asked why a 100 percent foolproof system was not possible, Hipkins pointed to the border and said the only way it could be achieved was if the country closed its border completely.

"That's not a feasible option for us. We still need to create a safe passage for New Zealanders returning home and the small number of essential workers that we're able to bring in," Hipkins said.

"Very, very importantly for a country the size of New Zealand, we have to keep our freight lines open ... and that means there are going to be people engaging with the rest of the world and coming into New Zealand, so no matter how good we build our defenses, there's always a risk there."