There have been no new cases of Covid-19 reported in New Zealand as the country prepares to enter alert level 2.

The number of confirmed and probable cases remains at 1497, with 1147 confirmed.

Two people are in hospital - one in Middlemore Hospital and one in North Shore Hospital - but there are no patients in ICU and there have been no further deaths.

There are still 16 clusters, four of which are closed, Dr Bloomfield said.

He said New Zealand's tracing system is at 'the gold standard' and is able to handle 185 cases a day, and targeting being able to trace contacts for 500 cases within six weeks.

Bloomfield paid tribute to nurses on International Nurses Day: "I'm sure all of New Zealand will join me in thanking our nurses today and indeed every day. Kia kaha." 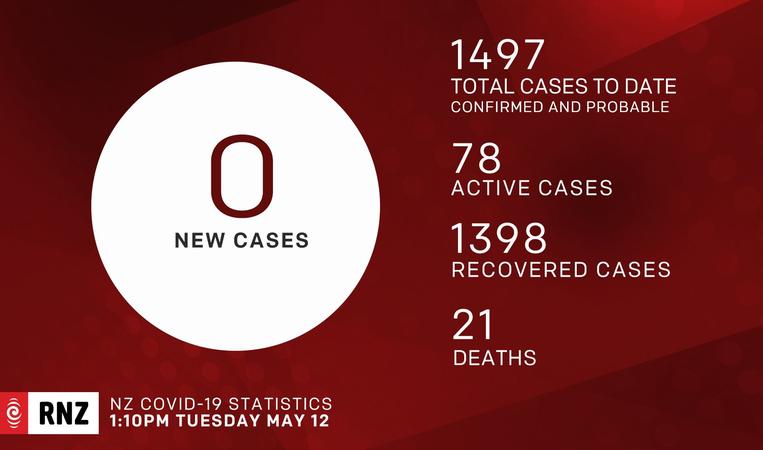 Retail, malls, cafes, restaurants, cinemas and other public spaces including playgrounds and gyms will be able to reopen on Thursday.

Schools will return to normal classes from Monday 18 May, while bars will have to wait until Thursday 21 May to reopen.

Discussing level 2, Bloomfield said hospital visits will be managed on the ground by DHBs but intensive care, the emergency department and maternity will still be one visitor at a time, although more than one person will be able to visit in a single day.

Bloomfield has issued an updated amended order under the Health Act allowing people to enter businesses to prepare for the move to level 2.

Ardern said 676 businesses have applied for tax refunds, and the first payments have been paid - worth more than $62 million.

"This package announced last month is the largest support package for businesses via the tax system in modern history."

The loans are interest free in the first year, and payments will be made within five days of the application being approved, she said.

The wage subsidy scheme has paid out $10.7 billion.

Ardern said at alert level 2, she urges people using public transport to plan their trip and track their journey.

When asked about the rule of only being allowed to have 10 people at funerals Ardern said it is about whether people are coming together to be with others.

"The thing that I have found as a human to be the hardest thing in all of this is funerals and tangihanga ... equally we're doing the same thing for every area and life events."

"We've tried to be really consistent."

She said this is intended to be a short period and is based on the advice of the Ministry of Health.

Dr Bloomfield said it is intended to ensure New Zealand continues to be safe.

Ardern said the Cabinet considered an exemption to tangi and funerals but found it too difficult to be able to carve out rules and exemptions around that.

"That's why we've used equally across the board the rule of 10," she said.

Earlier, Ardern told Morning Report that there are protocols in place if the alert level needs to go back up.