Dairy farmers are headed for a record milk payout as strong demand and tight supply hold up prices.

Fonterra has forecast this season's payout between $8.40 and $9.00 per kilogram of milk solids (kgMS), with the midpoint at a lifetime high of $8.70 compared with the previous forecast of $8.40, which was also the record payout of 2013.

Fonterra chief executive Miles Hurrell said the increased payout was worth $13.2 billion to the economy.

"It's the result of consistent strong demand for dairy at a time of constrained global supply."

"While we've seen demand soften slightly in China, global demand remains strong, and we think that will remain the case for the short to medium term," Hurrell said.

However, the higher cost of raw milk has flowed through to higher costs for wholemilk powder, a key ingredient in many products, resulting in higher manufacturing costs. 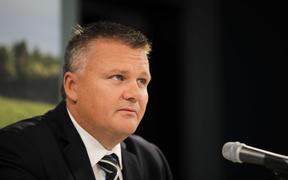 Accordingly, Fonterra has cut its dividend forecast by five cents to between 25c and 35c a share.

"A higher forecast farmgate milk price at this level can put pressure on our margins and therefore our earnings, which is why we've reduced the top end of our earnings guidance," Hurrell said.

First quarter trading showed a 5 percent rise in revenue to $4.4b despite a drop in sales volumes, but higher milk prices pushed up its cost of goods by 8 percent and its margin falling 3 percentage points.

Overall group earnings before interest and tax (EBIT) down 19 percent to $190m for the three months ended October.

Hurrell said local milk supply was currently down about 3 percent on a year ago, and full season production was expected to be marginally down on last season at 1525 million kgMS.

US production had stalled because of higher feed prices, and European production was also lower.

Fonterra's various divisions were feeling the effects of higher prices but steady volumes, while its Chilean business, which is earmarked for sale, was improving.

"Looking at the whole picture, I'm proud of what we've achieved. With EBIT of $190 million and a strong farmgate milk price, we are starting to consistently deliver solid commercial outcomes," Hurrell said.