Traffic was disrupted around the country today, with convoys of tractors and utes with dogs on board arriving in dozens of centres around New Zealand, as farmers protested against government regulations.

Groundswell NZ organised the 'Howl of a Protest' in more than 40 towns and cities over recent environmental regulations, the 'ute tax' and a seasonal worker shortage.

Co-founder Laurie Paterson said the "ute tax" was the issue people pointed the finger at, but farmers were also unhappy with the bureaucratic approach to the national policy statement for fresh water management.

From July this year, people buying new electric vehicles (EVs) could get as much as $8625 back from the government. The scheme will be funded through levies on high-emissions vehicles from 1 January 2022.

See how the day unfolded with RNZ's live blog here

About 100 tractors made their way into central Auckland, along the motorway to Queen Street and the Ellerslie race course.

Some farmers heading into Auckland missed the turnoff to the city and took the scenic route, driving their tractors over the Harbour Bridge.

Hundreds joined the convoy with a lap of the downtown area before gathering at Ellerslie Events Centre. 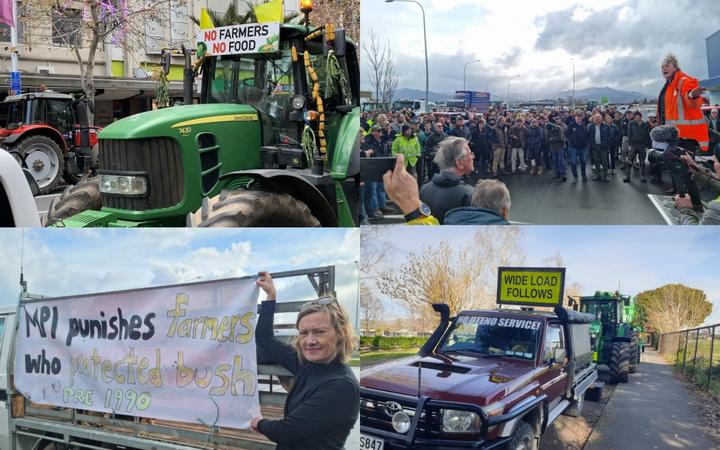 Traffic crawled through central Dunedin as dozens of vehicles taking part moved through the city from midday.

Utes and tractors stretched for more than 5km on Dunedin's Southern Motorway.

The Otago Regional Council said five bus routes, which operate throughout large parts of the city, were delayed due to congestion.

National Party leader Judith Collins attended the protest along with a cohort of party MPs.

The National Party is among the most ardent critics of the government's electric car rebate scheme and has said it will immediately reverse the policy if returned to power.

Collins addressed a large crowd of protesters in Blenheim during the protest.

She said she thought it was important to show her support for farmers.

Collins called on the government to listen to the concerns of those in the primary industries.

The Green Party acknowledged farmers have been asked to accept significant change, but said the climate crisis demands urgent action.

Greens environment spokesperson Eugenie Sage said she'd like to hear some solutions from the protesters, rather than complaints.

She said the government has provided huge support to help farmers make changes.

Seymour said the Labour government was doing some things well, but in other respects their approach, such as bringing in national-level rules for winter cropping, should be localised.

Seymour said many farmers also disagree with Significant Natural Areas, or SNAs, which are designed to protect remnants of native habitats.

Labour MP for Wairarapa Kieran McAnulty told RNZ that most of the farmers he had heard from told him the protest did not represent their views.

He said most farmers had been doing their bit for a long time, and he worried the protest would paint all farmers as climate deniers who did not care about the environment.

"I know that's not true but I would hate for that to be the image of farmers as a result of today ... there are legitimate concerns but obviously those concerns have always been heard and discussed with government.

"If we are going to get the best value for our products we need to show that we are environmentally sustainable, that we are climate friendly, and that we have ethical products." 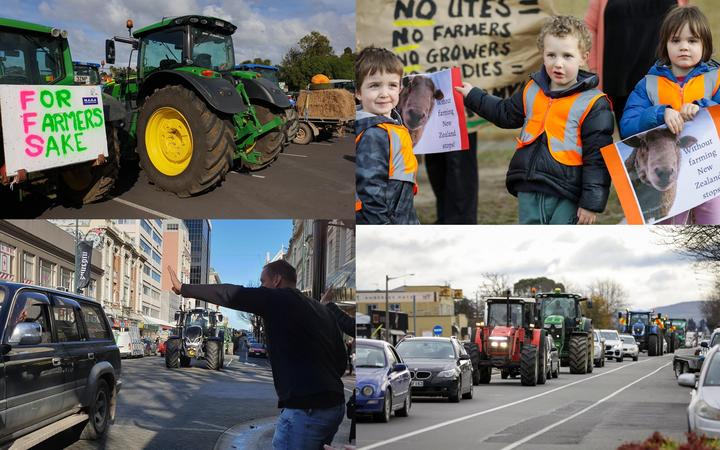 McAnulty said there was a very strong economic argument for the proposed changes, the farming leadership bodies and the majority of farmers were on board with them, and the protest would undermine the good consensus work done in the past four years.

One of the farmers' demands is that the government scrap its national policy statement on freshwater which came into effect last September.

The reform introduced regulation on fencing off waterways, reporting nitrogen use and changes to winter grazing practices to protect animal welfare. Groundswell NZ says that should be down to individual catchment groups and regional councils.

But Forest & Bird freshwater advocate Tom Kay said the government has already made concessions for farmers in the reforms.

He says the system up to now, with very lax rules on freshwater, doesn't work.

For farmers leading the way and taking action like planting along waterways, the policy statement won't be a problem at all.

"This is to bring up those laggards at the bottom end."

A lot of farmers' demands have been listened to by the government, he said. 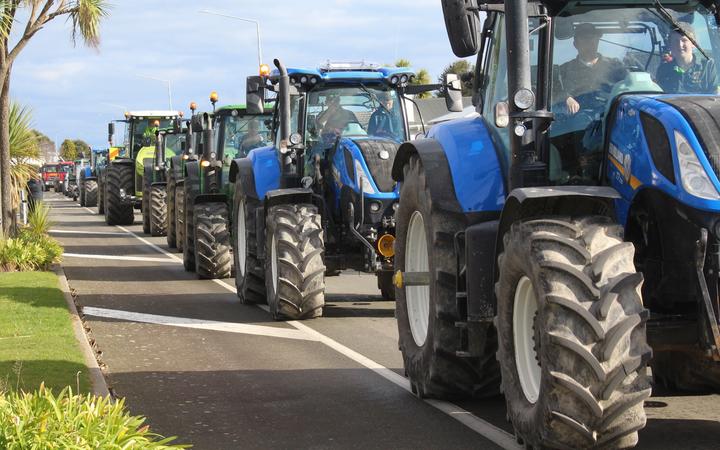 Tractors on the move in Southland. Photo: Matthew Rosenberg / LDR