A bull that has fathered more than 170,000 dairy cows has been inducted into an elite animal hall of fame. 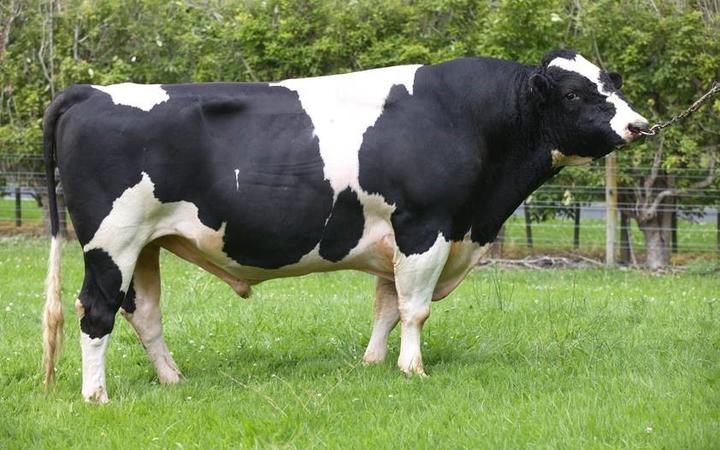 Beamer (full name San Ray FM Beamer-ET S2F), the Holstein-Friesian bull, was born in 2010 and went on to have a highly productive career.

His induction was announced by the farmer co-operative LIC at a breeders' day event in Hamilton.

Carterton breeders Sandra and Ray Hocking said, through artificial insemination, he had children as far away as Ireland and South America.

Ray Hocking said Beamer was a good natured animal, especially gentle in his old age, and there had not been a bull like him for decades.

"It's really marvellous. Not many people get that chance, or bulls, so I'm very pleased about it. He's a bull that's just done so much for the industry because of his qualities. He fits into the New Zealand farming system very well.

"I'm just pleased I had a chance to have something to do with a bull like that in the industry really. Also, I've got royalties on him so he's earned me quite a bit of money."

Beamer had a knack for breeding capacious daughters which were not overly tall but very wide with good udders, he said.

Hocking said they knew he would be special, being sired by 2015 hall of famer Fairmont Mint-Edition.

LIC spokesperson Simon Worth said Beamer was the 58th bull to be inducted - an honour strictly reserved for animals who had delivered a significant contribution to the dairy industry.

"Beamer well and truly meets that criteria. Not only has he fathered more than 170,000 daughters for New Zealand's dairy herd but he has also sired more than 92 sons and 54 grandsons who are now following in his footsteps and achieving tremendous success.

"He enjoys a good scratch behind the ears and is often seen in his paddock sitting like a dog, waiting patiently and keeping an eye on his surroundings."

Hocking said Beamer had retired and would now spend his time relaxing in a paddock.