Among the many activities people were able to do for the first time at the weekend under level 2, was to head to their local farmers' market. 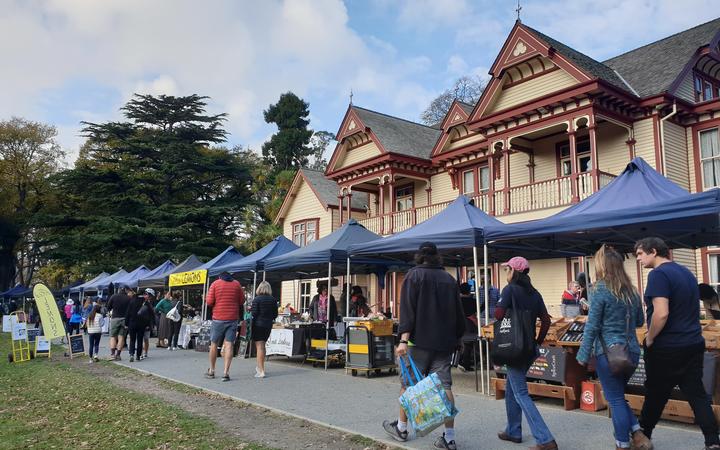 More than 1000 market-goers turned out to show their support for the Riccarton Bush market on Saturday. Photo: RNZ / Conan Young

The risk of spreading Covid-19 meant they were forced to close for seven weeks, leaving the many small producers and growers who relied on them, struggling to stay afloat.

At the Riccarton Bush market in Christchurch, more than 1000 market-goers turned out to show their support on Saturday.

Dana Codville from Grizzly Baked Goods said its loyal customers were helping the bakery claw its way back to profitability.

The support they received at their bricks and mortar store under level 3, was astounding, she said.

"Mother's Day this past weekend was as busy as Christmas which is usually like our busiest time of year. People just want pastries, they just want their sweets and so people are waiting in queues for half an hour, 40 minutes just to get to the front of the window and get what they're looking for."

The recent popularity of home baking had not put a dent in people's appetite for baked goods made by professionals.

"When we first shut down we were selling our sour dough starters to make people's bread and they were doing contests online to do your own sour dough loaves of bread.

"There were some interesting loaves of bread and I think people really appreciate the art of our bakers because it wasn't as easy as they thought it was going to be." 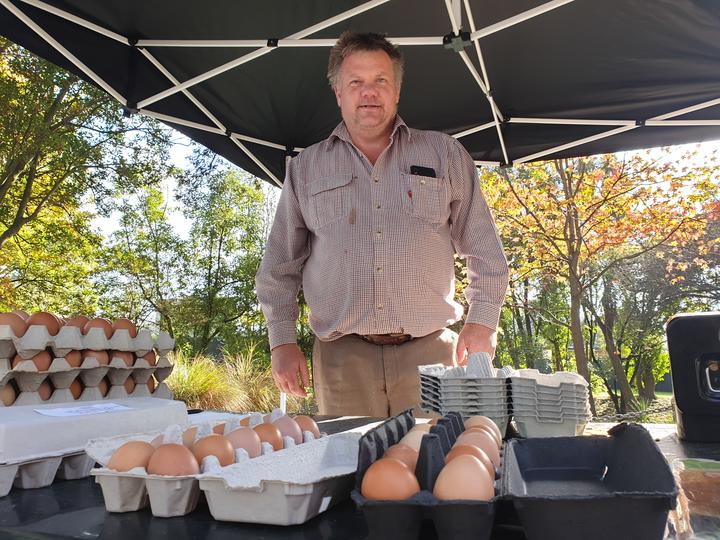 Bruce Greig said he had not been able to keep up with demand for his free range eggs during lockdown. Photo: RNZ / Conan Young

Bruce Greig had benefited big time from the baking craze.

Most of the free range eggs he produced normally went to restaurants and cafes.

Their closure meant he had to find another way to get rid of them.

"I went online very quickly at the beginning of lockdown, just through a Facebook page and I delivered. I haven't been able to keep up."

Martin Aspinwall from Canterbury Cheese Mongers had about half the number of people through at the weekend compared to what he would normally get and said his customers may have got used to the deliveries he had been doing during lockdown.

Market manager Sam Marchant said among the safety measures were taking down people's names at the gate, and a median barrier down the middle of the stalls so that people travelled in the same direction and did not bump in to each other.

"Just at the moment while the alert level is what it is, we're not encouraging anyone to settle down here.

"We're encouraging people to shop efficiently and quickly. So no seating or live music just for now. But that will come back."

Marchant said the market had weathered some big storms in the past, including the earthquakes, but this one ranked pretty high in terms of the disruption.

He expected more people would return in the coming weeks as people's confidence increased that the country had Covid-19 under control.