A huge haul of crayfish could be released back into the ocean after China cancelled orders amid the novel coronavirus outbreak. 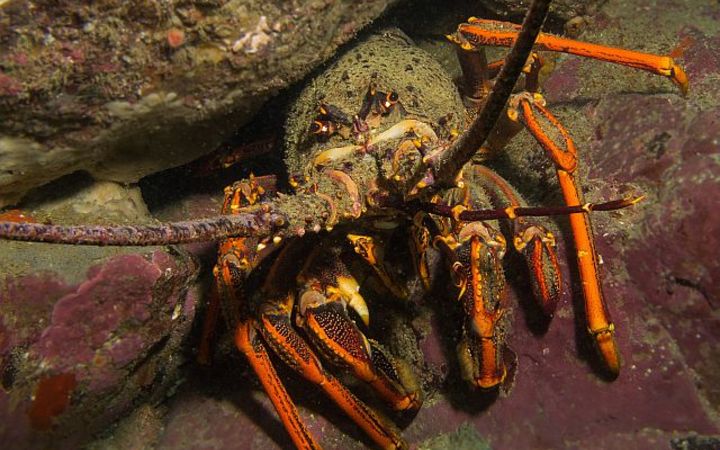 The government has ruled that a limited number of the crayfish held in pots and tanks can be released back into the ocean. Photo: Paul Caiger

The crayfish had been caught for sale to China but the orders were cancelled because of trade and travel disruption caused by the novel coronavirus outbreak.

The virus is thought to have first appeared in the central China city of Wuhan. The Chinese government has virtually locked down the province of Hubei and its capital, Wuhan. China is facing mounting isolation as airlines suspend flights to its mainland cities.

Between 150 and 180 tonnes of live rock lobster are held in New Zealand in pots and tanks, at sea and on land.

The government has ruled that a limited number can be released back into the ocean.

Live crayfish in holding pots at sea could be released immediately, subject to sign off by an official from the Ministry for Primary Industries (MPI).

Lobster held together at processing facilities would be considered on a case-by-case basis due to a risk of spreading disease.

"There are strict rules around the return of rock lobsters to the sea," Fisheries Minister Stuart Nash said.

"Officials want to make sure it is done in a way which ensures they are likely to survive, and also protects the environment where they are being released.

"Anyone who wishes to release live crayfish will need to provide information to Fisheries New Zealand, and fishery officers will monitor the return of crayfish to the sea."

Nash said where crayfish from different locations were held together, they they would not be put back into the sea.

"The reason for that is simply the biosecurity danger.

"We are not prepared to put the cray fishery at risk by saying all crays, no matter where they are, can be released.

"We have had a number of biosecurity incursions in our mussels and oysters and we are very keen to minimised that.

"That is why we are saying if crayfish from different areas have been mixed, then we are not prepared to put them back into one area."

Health authorities believe the novel coronavirus originated late last year in a food market in the city that was illegally selling wildlife. There have so far been more than 20,000 confirmed cases worldwide, and 490 deaths in China, one in Hong Kong and one in the Philippines.

The World Health Organisation has declared a global health emergency over the outbreak but said it did not yet constitute a "pandemic", or the worldwide spread of a new disease.

To minimise the economic impact of the coronavirus crisis on New Zealand, Nash is considering a technical change to allow catch entitlements to be carried forward from one fishery year to the next.

The Chinese cancellation of crayfish purchases has been a huge blow to the rock lobster industry, which sends between 96 and 98 percent of its exports to China.

In a statement, the New Zealand Rock Lobster Industry Council welcomed the decision to allow some crayfish to be returned to the ocean.

"Return of lobsters to the sea may be a useful option, particularly if those lobsters are available to harvest in the future through the carry-forward of unused entitlements," the statement said.

"Of course, return to the sea needs to be undertaken with care to ensure high survival. The industry is well placed for this because it has developed sophisticated animal husbandry procedures for transport of live lobsters to the export market."

The council added it did not expect market asccess issues to be resolved in the short term.