A Taranaki farmer fined $60,000 for illegally straightening a stream on his property is now facing potential legal action over discharge of hydrocarbons from a "land farming" operation into a stream. 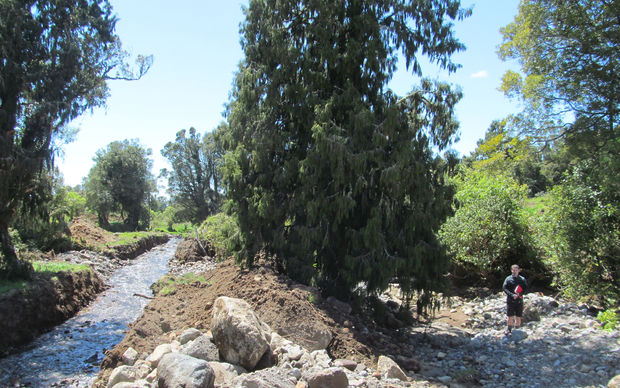 The constructed channel (left) and the dry natural watercourse (right) when the farmer straightened the stream on his property. Photo: Supplied / Taranaki Regional Council

Land farming involves spreading oil and gas wastes onto marginal farmland to allow it to break down and later be resown with pasture.

Colin David Boyd was convicted in 2016 on eight charges of breaching the Resource Management Act by diverting the Mangatengehu Stream.

The regional council discovered the hydrocarbon discharge during a routine inspection in November.

An abatement notice was issued and when officers re-inspected the operation it was being complied with.

Compliance manager Bruce Pope said Mr Boyd has been issued with six abatement notices over the past five years and further enforcement action was still being considered.

"We have used and will continue to use all the enforcement tools available to the council under the Resource Management Act, including prosecutions, until such time as Colin Boyd complies with his consents and regional plan provisions."