A cafe breakfast of quinoa porridge about five years ago has proved fruitful for a Taranaki farming couple. 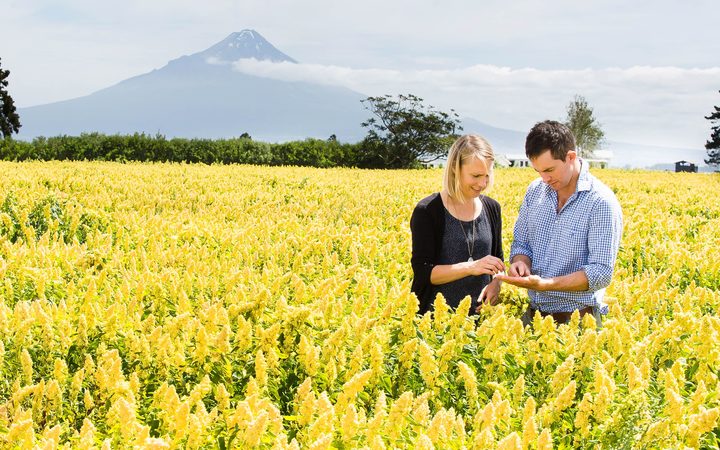 Kate and Hamish Dunlop grow quinoa on part of their sheep and beef farm in Hawera, south Taranaki. Photo: Supplied

Kate and Hamish Dunlop are now growing the sought-after South American food on a fraction of their 400ha sheep and beef farm in Hawera in south Taranaki.

They planted their first crop three years ago and have found it relatively trouble-free, and the yields impressive.

Mr Dunlop said the pseudo-cereal was not officially a grain.

"It's actually classed as a seed. It's part of the chenopodium family, so it's related to beetroot, and things related to that."

It emerged from the ground looking like a "small green weed", but super lush, and flourished in the right conditions, he said.

Mr Dunlop said their rich, volcanic soil in the shadow of Mount Taranaki closely resembled that of the crop's origins in South America.

Quinoa was said to have originated in the Andean region of northwestern South America and was domesticated for human consumption 3000 to 4000 years ago in the Lake Titicaca basin of Peru and Bolivia.

Mr Dunlop said the seed was imported from South America through the Ministry for Primary Industries under strict control.

"It was a rigorous programme getting through MPI. That was a real learning curve, and quite a battle to tick all the boxes for it being clean seed and up to standard."

Mr Dunlop said the crop did not appear to have any drawbacks, in that it was not especially susceptible to fungus or pest problems.

"It's proved to be a pretty resilient plant, we're finding. Over the last three years we've not had any crop failures."

The Dunlops are not spraying the crop, and prefer to use inter-row cultivation to keep out the weeds.

"In general, the pests don't attack it. So far, we haven't found that."

Mr Dunlop said the yields had got better, from an initial 1.5 tonnes per hectare to 3.5 tonnes last harvest.

He said a growing awareness of the fast-cooking alternative to rice or pasta meant there was a keen appetite for the product already.

"The market is a growing one in New Zealand. We are selling it domestically and we're in the health food category of supermarkets.

"From that point of view it's great timing that we've got the volumes and things to be able to supply supermarkets, which we're just on the cusp of doing."

The quinoa was due to be launched into the Countdown chain this week.

The Dunlops are about to plant their next crop, which will be harvested in either late February or early March next year.