A long-time Cheviot farmer has outed himself as having the first farm in the area to test positive for Mycoplasma bovis. 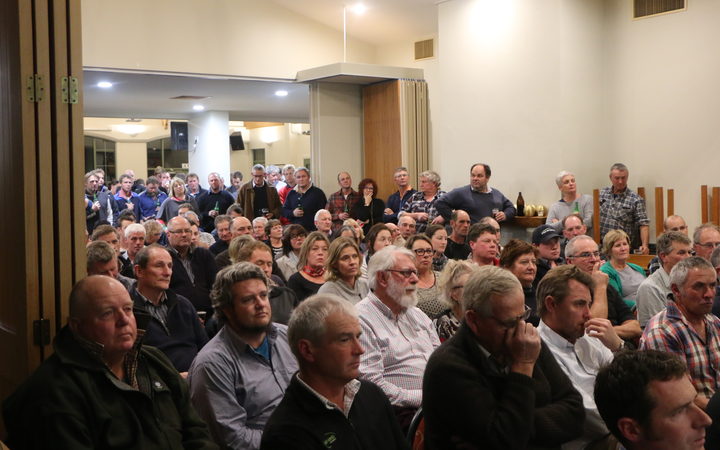 The admission came in the middle of a meeting in Cheviot last night, where hundreds of farmers, stock sellers and local leaders packed a local pub to hear how the Ministry for Primary Industries (MPI) is handling the disease.

It was the first of a series of meetings by MPI since the government decided to attempt to eradicate the disease.

Richard Maxwell and his wife Jane have been farming in Cheviot since 1983, but in February testing began that resulted in their farm being the first in the area identified as being infected with Mycoplasma bovis.

Mr Maxwell told the meeting while they were planning to retire, this was not how they had hoped to finish their farming career.

"We are just trying to focus on getting the farm ready for the two neighbours who have bought it and then get on with our lives."

Figures from MPI show the Mycoplasma bovis has been found on 45 farms in total, and 35 are currently infected. Ten are no longer considered infected because animals have been culled and the property has been cleaned and disinfected. About 300 more are under lockdown.

Questions and criticism came thick and fast from farmers last night, many frustrated with how MPI was handling the crisis.

One farmer, who did not want to be named, said he thought MPI was taking far too long to put in effective controls to stop the spread of the disease.

"As soon as [the disease] came out they should have had a lock down [everywhere], found out where the infected herds were and then go from there."

Other farmers also raised concerns about the Privacy Act, which they said prevented MPI telling those surrounding an infected farm their neighbour had the disease.

Culverden dairy farmer, Allen Davie-Martin, said the meeting helped give the community confidence the disease could be overcome.

"People were concerned that the horse had bolted," he said.

Local farm owner, Bryden Black, said North Canterbury farmers had taken a battering in recent years, and the community needed to band together if it wanted to beat Mycoplasma bovis.

"We've had the worse drought for 80 years and it lasted about two-and-a-half years, coupled to that, the icing on the cake was the Kaikōura earthquake ... which was pretty devastating," he said.

MPI head of biosecurity Roger Smith said the ministry was doing as much as possible to support the farming community.

But he said there was going to have to be big changes in the sector.

"We need the farming community to identify how they can do that."

Another meeting is planned in Waikato on Friday.