The dairy farmer at the centre of the South Island cattle disease outbreak is worried it could be more widespread than thought.

First discovered in July, mycoplasma bovis has been found on seven farms in South Canterbury and North Otago - five of them owned by the Van Leeuwen Dairy Group who have 16 farms in the area. 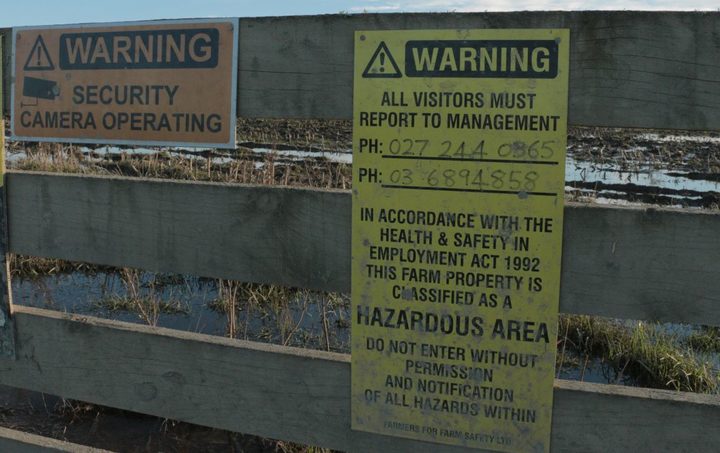 A warning sign on the gate of one of the infected farms. Photo: RNZ / Alexa Cook

On Wednesday the Ministry for Primary industries (MPI) quarantined two new properties that border a Van Leeuwen farm because of "suspicious" tests.

Aad and Wilma Van Leeuwen, who own the large dairy group, said this was worrying.

"None of the livestock on the two new farms in lock down have had any contact with any livestock owned by Van Leeuwens.

"This is starting to confirm our belief that the bovis bug may well be more widespread than just the seven confirmed farms to date."

But he said it was not a significant discovery.

"We do not believe the new suspect properties represent a game changer. These farms are in the same geographical area to all known infected properties and neighbour Van Leeuwen Dairy Group farms.

"Our investigators are still building a picture of how animals on the farms could have been infected, if indeed they are, and what stock movements may have taken place onto the farms."

On 1 August the ministry said it would bulk milk tests tankers across the country to see if the cattle disease outbreak had spread out of the region.

However, two weeks later the minstry changed tactics and said instead of bulk milk testing it would test milk on all farms in North Otago and South Canterbury for the disease.

Mr Van Leeuwen said they should have stuck with the bulk milk testing plan.

"Disappointed that instead of bulk milk testing farms nationwide for a period of time, there has been too much concentration on local testing, or testing of farms connected to the seven infected properties.

"Nationwide proper bulk milk testing of a large amount, say 4000 or more individual farms twice a week, should have been done and could still be done, to try and get a more reliable confirmation of how widespread the disease is." 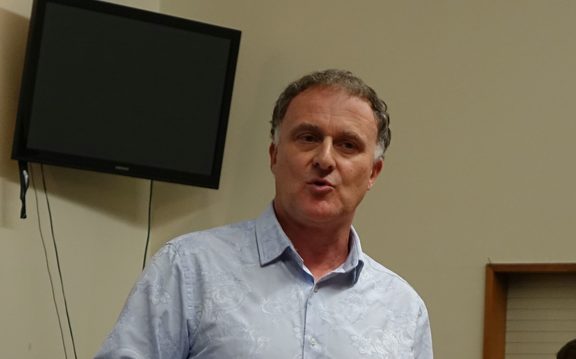 MPI said it had a comprehensive surveillance programme and had now tested more than 40,000 samples of milk, blood and swabs.

Mr Gwyn said the ministry also has a 'pathway investigation' underway to find out how the disease got into the country.

"We haven't had the results of that yet, but it is looking at multiple pathways including live animals, germplasm, feed, what we call biologicals for example vaccinations, and contaminated equipment.

"We're working with Weybridge, which is a laboratory in England, to try and gene type this particular strain, and we anticipate we'll get the full report towards the end of this month."

Mr Van Leeuwen said it was looking like there would be no answers on how the outbreak got into the country and how it got on to their farm.

"We all might never know where the bug has come from and we believe that MPI is at a loss too as to how it got here."

Mr Gwyn says in the opening days of the response, MPI did consider testing bulk milk samples from across the country for the disease, along with other surveillance methods.

"However, the situation has been a rapidly evolving one and MPI's surveillance programme moved in accordance with the knowledge of the disease and input from international experts.

"Our surveillance is focused on searching in the places the disease is most likely to be present and has been developed by MPI's skilled scientists along with advice from Massey University's EpiCentre - the largest veterinary epidemiology training and research centre in Australasia."

Mr Gwyn said while Mr Van Leeuwen is a very experienced farmer, he is not an expert in animal disease or surveillance.

He said the bulk milk testing that Mr Van Leeuwen wanted to see was used in Australia where the disease had been present for some time and animals with it were less visibly sick than those in New Zealand.

"We may still use a similar bulk milk testing programme in the future as part of a "proof of freedom" surveillance program should it become possible to clear the country of disease - and this will be used in a similar way to that of the Australians."

The ministry decided to cull 4000 infected cows from the five infected Van Leeuwen farms to minimise the spread of disease - saying they were cautiously optimistic it was under control.

"We're currently dealing with the first infected place which has 2000 cattle and we're halfway through that."

However, Mr Van Leeuwen said only just over 400 animals have been culled so far, which were mainly youngstock belonging to the sharemilker.

"We have a sharemilker who is devastated that the herd they have been building up is being eradicated, and they are feeling broken.

"This couple will be looking to leave the industry as we understand their bank has told them they will no longer support them if they wanted to repopulate their herd."

He said staff on the Van Leeuwen Dairy Group farms were "frustrated, tired and had enough of it all" and the contract milkers on the initial outbreak farm would also be hard hit.

"When MPI start eradicating those cows their income stream will dry up.

"We would love to save these people and keep them in the saddle but we are finding this impossible as we are now fighting to save our own business."

The Van Leeuwens are on the NBR Rich List and estimated to be worth about $60 million.

The Ministry said affected farmers can apply for compensation under the Biosecurity Act.

Mr Gwyn said the process required the famers to produce evidence of their loss.

"That involves stock valuations and also loss of milk production, so it's a matter of getting verifiable evidence that we're able to use to validate their claim."