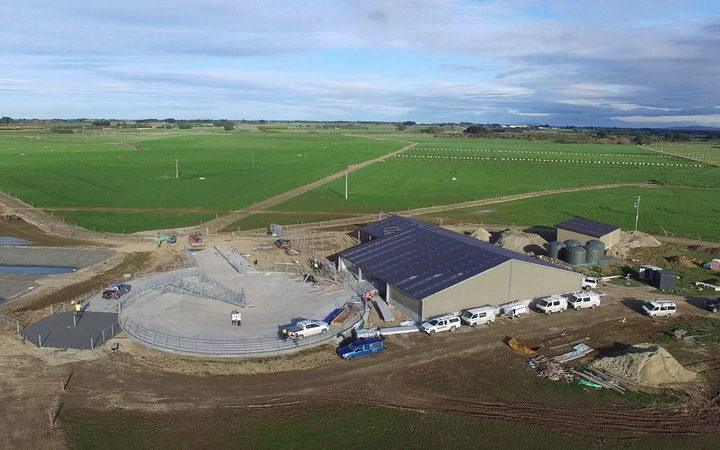 The Southern Dairy Hub in Makarewa near Invercargill. Photo: Supplied

The research and development centre is based around a 349 hectare demonstration farm which will milk up to 800 cows.

Local farmers and businesses have invested $1.25m into the hub and Agresearch and DairyNZ have forked out $5m each.

Today's opening is about a year later than planned because the developers struggled to find enough land in the right place.

They eventually bought Alliance's venison operation in Makarewa and converted it into a dairy farm.

Southern Dairy Hub chair Maurice Hardie said the opening was an important milestone for the region, and New Zealand.

"Carrying out research in the southern region's climate and soil types will be invaluable."

DairyNZ chief executive Tim Mackle said the hub would address some key challenges in the dairy sector such as water quality and greenhouse gases.

He said one of the first projects was about feeding cows through Southland winters.

"What sort of crops you grow in the region? Some of the research kicking off really addresses those issues.

Mr Mackle said it was an exciting new venture and the demonstration farm would be produce milk this season.

The Southern Dairy Hub will also have projects that related to farmers across the country, and Mr Mackle said it would be a very interactive centre.

"Farmers will be able to drop in and attend fieldays and being linked with DairyNZ - we've got a strong network.

"Farmer-to-farmer learning is one of the key things to help drive change in our industry as well."