An international soil scientist is urging the government to reduce carbon by promoting "no-tillage" farming to the primary sector.

The method is a way of growing crops or pasture from year to year without disturbing the soil through tillage, which results in carbon being captured in the soil instead of released through ploughing.

Scientist John Baker met with Labour MPs this morning as part of his crusade to get the message across that New Zealand has the machinery and technology to transfer carbon into the soil and keep it there.

Dr Baker said he was trying to convince politicians of the important role that no-tilling can play.

"There's a huge opportunity in New Zealand for re-gathering carbon and putting it back into the soil," Dr Baker said.

"Some of our methodologies now for sowing arable crops end up putting more carbon into the soil than they take out so it's actually a net gatherer of carbon dioxide out of the atmosphere.

"So you're solving two problems at the same time - you're reducing the CO2 in the atmosphere and you're re-stocking the soil with organic matter."

Dr Baker said the issue of the world being unable to feed itself in 50 years' time was probably bigger than climate change.

"I'd like to think that the government can encourage getting that message out, it's all there, the technology is there the methodology is there," he said.

"Farmers know about it but they don't have a great incentive to do it." 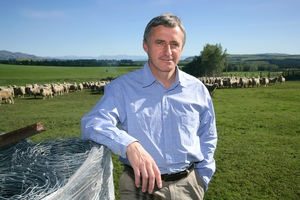 "No-tillage makes a lot of sense for a farm like mine, which is rolling hill country where two decades ago we had eight inches of rain in eight hours," Dr Rolleston said.

"If we had our paddocks ploughed up they would all be down in the ocean right now so no-tillage keeps the soil structure and allows you to put in crops faster and increase productivity, but also stopping that erosion.

"I think that is something that the parliamentary commission would be very happy about."