The brother of one of the men who died in the Christchurch mosque attacks is frustrated at the two-month delay in legal action, after the accused killer appeared in court today. 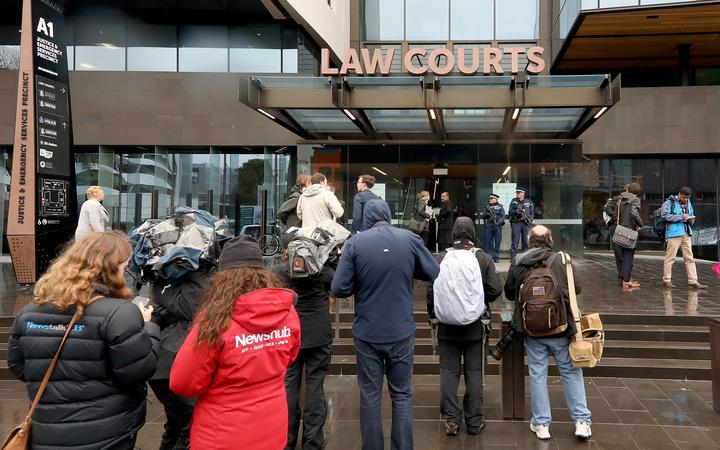 Journalists gather outside the Christchurch District Court ahead of alleged gunman Brenton Tarrant's appearance for his hearing via audio-visual link from a maximum-security prison in Auckland. Photo: AFP

Brenton Tarrant appeared at the High Court in Christchurch via a video link from an Auckland prison. The 28-year-old faces 50 murder charges and 39 of attempted murder.

Security was high at today's appearance, with armed police at both entrances to the court building, and a vehicle carrying a police armed offenders unit circling the block.

The public gallery was packed to standing capacity with members of the Muslim community and journalists from New Zealand and around the world. About 50 family members and those injured in the mosque attacks were there.

Justice Cameron Mander remanded the accused gunman in custody until 14 June, in order to get a mental health assessment.

The hearing was the first time the families had been able to see him since the attacks.

Temel Atacocugu - who was injured in the attacks - left his hospital bed to attend the hearing, arriving at court in a wheelchair and their hospital gown. 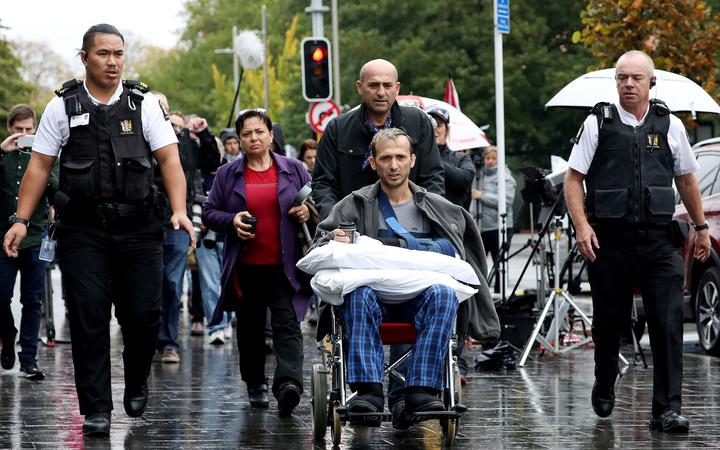 Outside court, Tofazzal Alam, who was in the Linwood Mosque, said seeing the accused gunman again was upsetting.

"He killed 50 people and he doesn't look like he bothered. He doesn't have any emotionality. I didn't see any emotion on his face."

He told Checkpoint in the days after the attack that he was too scared to pray outside his home and had become afraid of strangers.

But today he faced those fears and travelled to the High Court in Christchurch to see the accused with his own eyes.

He said it was something he was not able to do on the day of the shootings.

"I didn't see him during the shooting, I was laying down on the floor. So I wanted to see how he feels after killing 50 innocent people."

Shahid Tanveer Mohammed, whose brother Suhail was killed in the attacks, travelled from New York and attended court today.

"I'm not satisfied with this hearing.

"For the mental health for two months. I have no idea … around how it's working.

"Why they don't do the speedy trial… means I'm really disturbed and really upset."

Two sons of one of the victims - 71-year-old Haji-Daoud Nabi who died in the Al Noor mosque - also decided to go to court.

Yama Nabi said it was a difficult day for his family.

"I'm trying to stay strong to come here, because I don't want my mum to come over here, so I just see what he have to say."

His brother Omar Nabi said it was good to see the accused for himself, but he was also frustrated at the two month delay before the accused gunman's next appearance.

It was not the outcome they wanted, he said.

"It is very painful to go through a process that shouldn't actually take that long."

Brenton Tarrant is led into the dock in his first appearance for murder, following the deadly terror attacks on two Christchurch mosques. Photo: Screenshot

It was the defendant's second court appearance, after briefly appearing in Christchurch District Court on 16 March, the day after the mosque attacks. At that hearing police had laid a single charge of murder.

He now faces 50 charges of murder and 39 counts of attempted murder.

Justice Cameron Mander formally recorded that the further charges had been filed by the Crown.

He noted the initial murder charge, which named a woman who was in fact alive, was to be amended and suppressed that woman's name.

The judge also suppressed the names of the attempted murder victims.