Two anti-immigration websites based in New Zealand have been taken down in the wake of yesterday's Christchurch mosque shootings, with one saying it will cease operations immediately. 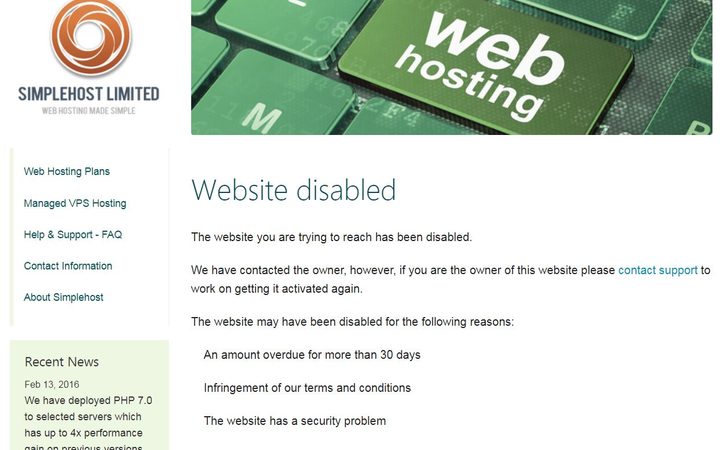 The New Zealand National Front website has been taken down in the wake of the Christchurch terror attacks. Photo: Supplied

The Dominion Movement, whose website had claimed Europeans are New Zealand's "defining people", has said on Facebook that it is closing down as a result of the attacks in Christchurch yesterday that claimed 49 lives.

Peter Hall-Jones, who describes himself as a concerned New Zealander, made a formal complaint about the New Zealand National Front website last night, following the terror attacks.

He said the website had posted information about the killings and comments had been left saying things such as 'this is what happens when too many immigrants are allowed into the country'.

Mr Hall-Jones said he was concerned about hate speech against immigrants on the website.

In his complaint, he said that "hate speech is not a sub-section of free speech".

"The National Front is the New Zealand centre for the ultra right wing," he told RNZ.

"Some of the comments about the story were racist."

Mr Hall-Jones said the government should crack down on ultra right wing and white supremacist, neo-Nazi groups in New Zealand, given the number of attacks they carry around globally each year.

"We should be calling on the government to acknowledge this issue and redirect the attentions of the GCSB and SIS at these characters, rather than, or at least in addition to, their current singular focus on phantom Islamists," he said.

The New Zealand National Front could not be reached for comment.

The National Front made it clear it did not condone the Christchurch killings.

"At the present time, the events in Christchurch do not involve the New Zealand National Front or its members," the group said in a Facebook post.

"The National Front does not condone or agree with this type of wanton murder of innocent people regardless of their religious beliefs.

"We believe in freedom of speech and freedom to worship whatever god you choose."

Another anti-immigration group, the Dominion Movement, chose to take down its website yesterday.

"The Dominion Movement categorically and without reservation condemns the events in Christchurch. (Neither) our movement nor any of its members have ever had any communication or association with the perpetrator," the group said in a note on the closed page.

"From day one, our movement has been committed to non-violent solutions to the problems affecting our nation.

"In light of the atmosphere which is emerging in the wake of these events, it will be impossible for the Dominion Movement to continue our work. We will be ceasing all operations immediately. This site will stay online for a few days before shutting down permanently."

The wording on the site has since changed to say the site "will be taking a hiatus".

The group had previously stated on the website "Europeans are the defining people of this nation".

"As young white men, we honour the sacrifices of our forefathers by protecting and strengthening the legacy they left us: New Zealand herself," the Dominion Movement website had said.

Mr Howard said his company had not been aware of the content of the New Zealand National Front website and would not continue to host the site in future.

"We look after hundreds of sites. As soon as it was brought to our attention, I instructed my IT to take it down," Mr Howard said.

"The situation is very raw with a lot of New Zealanders, including myself.

"If there's any confrontational information on that site, I don't want it on my servers."