The head of the Canterbury Earthquake Recovery Authority says liquefaction in parts of Christchurch following Friday's swarm of earthquakes is as bad as after the September earthquake in 2010. 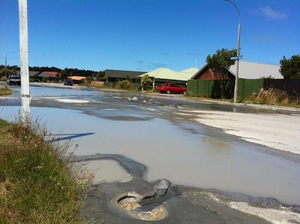 Roger Sutton flew over the city and says he say extensive liquefaction and flooding in the eastern suburbs, particularly in Bexley, Dallington, Wainoni, Avonside and Parklands.

He says there are some reports of cars stuck in the mud.

Mr Sutton says there is also further damage to buildings within the cordoned-off city centre, including to Christchurch Cathedral.

However, Mr Sutton says there seems to be no damage to houses or roads and there has been no evidence of landslides.

Civil Defence says people should stay clear of the Port Hills where possible while engineers evaluate the area for further rockfalls.

A Radio New Zealand News journalist has described dramatic scenes during Friday's earthquakes, including liquefaction and giant clouds of dust from rocks shearing off cliffs.

Katy Gossett, who lives in Sumner, was in her car during the second large quake near Redcliffs and told Checkpoint she could see a huge cloud of red dust just a few hundred metres away.

She says after the second aftershock hit she could see discoloured water from liquefaction creeping into the sea.

Reporter Bridget Mills in Bexley described huge potholes in the roads there.

She said the tarmac felt "like jelly", there was fresh flooding and people were evacuating the area.

Nineteen people were reported to have required medical treatment as a result of the quake.

One person was reported injured at Eastgate Mall and was taken to hospital.

St John Regional Operations Manager Chris Haines said the organisation received 19 call-outs in the hour following the first quake, all of them minor.

Canterbury DHB reported large numbers of people turning up at the emergency department, most of them for chest pains and other conditions brought on by the quakes.

The DHB says the birthing unit at Burwood Hospital has been closed temporarily and women booked there should instead go to Christchurch Women's Hospital.

Buildings brought down or damaged

Police say there have been reports of damaged buildings around the city, including the city's 13-storey central police station.

A spokesperson says staff are working out of only the first four levels of the building because of damage to the upper floors, including fallen ceiling tiles.

Some residents at Windsor Hospital rest home in New Brighton were reported to be trapped for a time on the second floor but were evacuated by the Fire Service.

An Indian restaurant in Sumner and a vacant house in Aynsley Terrace in Hillsborough were also damaged and a red-stickered house in Oram Avenue in New Brighton has collapsed.

Another building on the corner of Charles and William Streets in Kaiapoi is at risk of collapse, and a stop bank in Kaiapoi has been damaged.

Damage was also reported to the Work and Income building in New Brighton but all staff were safely evacuated.

Earthquake Recovery Minister Gerry Brownlee says the city's infrastructure has been largely unaffected. The sewerage and water systems had not been damaged and public transport was still running.

Christchurch mayor, Bob Parker says there are still situation reports to come in as council staff check infrastructure, but at this stage he is pleased at the way it has stood up to the shaking.

Some people in eastern suburbs lost power when supply to the area was tripped by the tremors.

Initially, 26,000 residents were affected but by late on Friday evening all but about 1500 had been reconnected.

Police and other officials are patrolling the streets of the city on Friday night to reassure shaken residents.

Four teams of Civil Defence and Red Cross staff are door-knocking in the eastern suburbs to determine the needs of residents while extra police have been brought in.

All officials will be carrying identification.

The initial 5.8 earthquake struck at 1.58pm on Friday and has been followed by a swarm of aftershocks.

All have been centred in Pegasus Bay between 10 and 20 kilometres east of Christchurch at depths as shallow as 6km.

While the quakes have been under the sea, specialists say there is no tsunami threat.

Mayor Bob Parker says the city's malls, which were evacuated when the swarms of quakes began, have been checked and he expects they will all be open again on Saturday for pre-Christmas shoppers.

The earthquakes also closed a number of supermarkets on one of the busiest shopping days of the year.

The two major supermarket firms, Foodstuffs and Progressive had some stores open, but others were closed while damaged goods were cleared.

It is hoped they will reopen on Saturday.