Contractors will begin digging the foundations for the Anglican Church's new base in Christchurch, popularly known as the cardboard cathedral, on Tuesday.

A spokesperson for the earthquake-damaged ChristChurch Cathedral, Reverend Craig Dixon, says he heard on Monday building consent for the foundations of the temporary replacement has been granted.

Rev Dixon says work on the foundations of the transitional cathedral will begin on Tuesday morning.

He says it was originally thought the foundations would cost $150,000, but as details of the design emerged it became apparent the cost will be closer to $600,000.

Rev Dixon says fundraising for about $1.2 million will be necessary for the entire building, in addition to the $4m already set aside.

He says help is coming from as far away as Adelaide and Britain, and he is confident the transitional cathedral will be standing by Christmas. 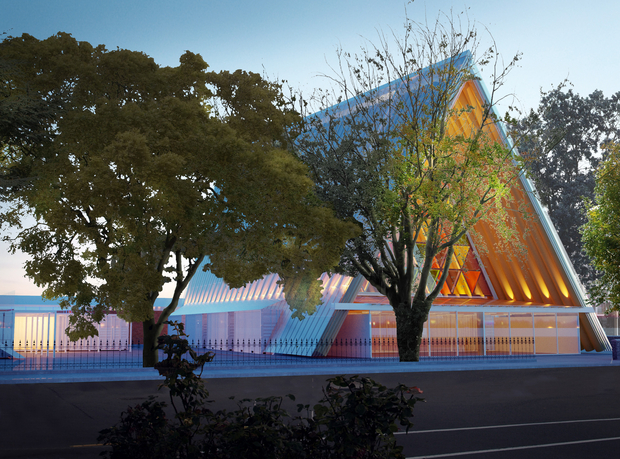 The building, which will stand next to Latimer Square, was designed by Shigeru Ban, who visited Christchurch last week to finalise details of its construction.

Rev Dixon says the transitional cathedral will be as tall as ChristChurch Cathedral was but will made with unusual materials.

"The external view of the cathedral will be a massive polycarbonate roof - that's a plastic roof. It's a honeycomb insulated large, plastic cover which, figuratively, is an enormous glass house which will glow at night. It will look spectacular in the daytime, just because of its size."

Rev Dixon says the budget is very tight but the church is confident a building of national and international significance will be built.

Rev Dixon says there is still some planning to be completed, and the budget is very tight, but the church is confident a building of national and international significance will soon grace the city.

He says the church will be built to 100% of the building code and its design and construction will be unlike anything in the city.

He says after about 10 years, or at a point when a cathedral is completed in Cathedral Square, the transitional cathedral will serve as an inner city church for the large congregation of St John's.