An investigation into one of the country's largest freight companies has found drivers felt forced into falsifying their logbooks and ditched mandatory rest times in order to make their runs on time. 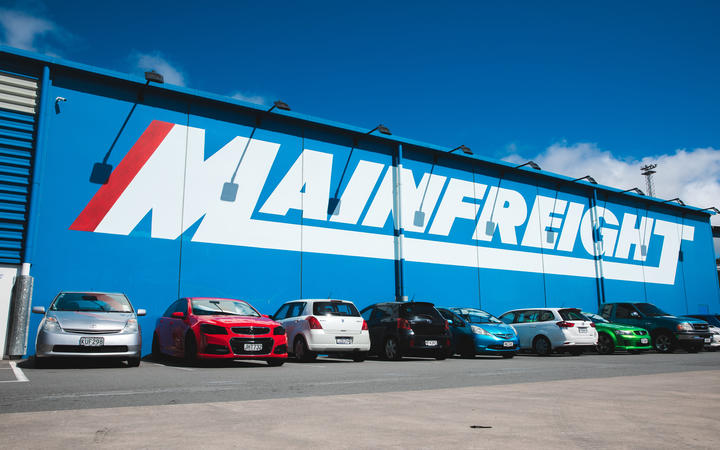 "Employees logbook pages indicate (at face value) that the work time rules are being complied with, however a comparison to GPS data and other records such as fuel statements and road tolling records showed a completely different picture," a letter to the Mainfreight general manager read.

The letter said as the drivers were contractors, not employees of the company, they were responsible for managing their own logbook but noted that drivers had identified a number of reasons why they had broken the rules in the first place.

"Feeling pressured to make destinations and reluctant to advise their employer or Mainfreight that they cannot meet their expected deadlines due to work time restrictions," Waka Kotahi wrote.

Other reasons were delays in loading or unloading at pick up and drop off destinations and delays at the Cook Strait ferry terminal.

Work time rules are that drivers must take a break of at least 30 minutes after 5.5 hours of work time.

An internal memo between NZTA staff explained there were four routes across the North and South Island where drivers frequently exceeded work time hours, or were falsifying rest breaks.

"This is a Mainfreight issue that requires a review of the route schedules and unloading times, as well as a review of loading procedures to ensure loads are ready to go on time. It also requires branch managers and dispatchers to have a 'very good' understanding of the work time and logbook rules," the memo read.

Managing director Don Braid said all routes had since been reviewed.

"Only one route was marginal and as a result has been reconfigured. Depot loading and unloading times have been addressed on key long haul routes to ensure drivers are efficiently loaded and depart on time," he said.

The level of driver infringement was previously unknown to the company because of privacy laws due to the fact most drivers were self-employed contractors, he said.

"The report has been well received by our team including the Owner Drivers. It was also good to work with all three agencies; NZ Police, Waka Kotahi and Work Safe. In doing so, we have been able to share a lot of information to improve systems, access relevant Owner Driver information that was otherwise unavailable, and establish ongoing collaboration for the future."

Mainfreight had since implemented a number of surveillance measures including installing e-logbooks and auto-sense software in all line-haul vehicles to manage driver fatigue and distraction.

The company would also increase training to do with work time and logbook rules, Braid said.

However, First Union which has a large transport sector representation, said the focus on increased driver monitoring was missing the point.

Strategic project co-ordinator Anita Rosentreter said it was obviously a systemic problem, and the findings were likely indicative of what was happening in the wider industry.

"The entire system is broken. It involves competitive tendering by large transport buyers, like supermarkets and other retailers, creating a race to the bottom on wages, and locking transport operators into unsustainable contracts.

"And the reality on the ground for drivers, as a result of that system, is constant pressure to move goods quickly, and on wages that are so low that they can't afford to maintain their trucks.

"The increasing levels of surveillance and monitoring effectively shifts the focus away from those who actually have the power in this industry to make the changes necessary to fix the problems."

She described the report as "damning", but criticised it for not including a worker voice.

"Through the process, the union wasn't involved and as a result of that, what we say is that they've identified some of the issues and made some recommendations, but they've missed the core issue, which is something that probably would have come through if they had engaged with workers."

The union would be re-igniting its concerns around work time and logbook breaches and the reasons for this with the government, she said.

"This is a review that they've undertaken, they were clearly interested in the results and so we're really keen to engage directly with them about that."

The audit was a joint investigation with Police and WorkSafe, which began when the Police Commercial Vehicle Safety Team identified repeated issues associated to Dangerous Goods loading, on Mainfreight trucks.

The audit also found problems with driver licensing information held by Mainfreight not matching the licence actually held by the driver, and instances where the driver was incorrectly licensed.

Waka Kotahi said Mainfreight's culpability in legislation pursuant to Section 79T of the Land Transport Act 1998, 'Chain of Responsibility', was considered in relation to the identified work time breaches.

"However, based on the circumstances of much of the offending, and Mainfreight's proactive response to the range of issues identified as the review progressed it is considered that no further action is warranted."