A growing number of people are giving up on the idea of owning a property because of soaring prices, according to a new survey. 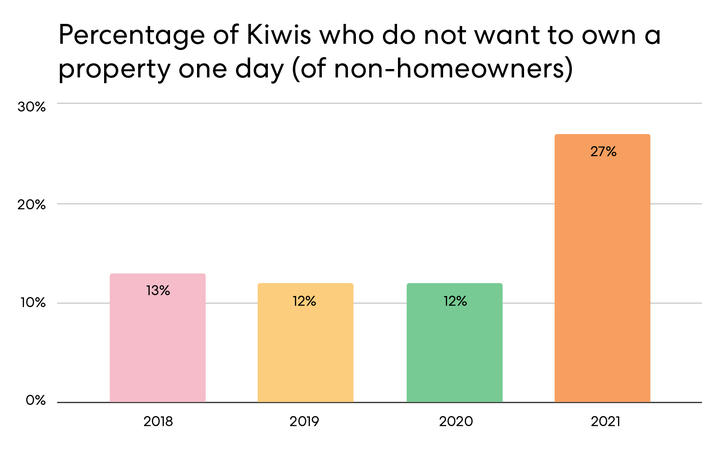 Online investment platform Sharesies' annual survey showed 27 percent of respondents did not want to own a property, more than double the level of the past three years, with 23 percent saying this was because they could not afford one compared with 16 percent in last year's survey.

"It's no secret that the housing market is unattainable for many, and you can no longer blame millennials and their love for avocado on toast as the reason for being locked out," Sharesies said in a commentary.

Other findings of the survey of nearly 1700 respondents, more than a third of them Sharesies investors, showed about half were comfortable with their current financial situation, although Wellington respondents were happier than those in Auckland.

The level of financial literacy improved to 41 percent understanding how investing generally worked, while nearly a fifth had no investment strategy and half never checked financial markets, but there was a growing understanding that $1 million of savings would be needed for a "comfortable" retirement.

However, to most questions Sharesies subscribers were more attuned to markets, differing financial products, had a better understanding of financial jargon, and had become more aggressive with their investment strategies since the pandemic.

And Sharesies users were also more likely to invest spare cash in share markets, in stark contrast to other New Zealanders who would rather put their money into an emergency fund, pay off their debts, or travel around the country.

The survey also highlighted the divide between ethnic groups with Pasifka and Māori the least likely to be comfortable with their financial situation, and also feeling less in control of their spending.