The shoe brand Converse has quietly removed any reference to the environmental impact of its global public art campaign from its website after being accused of greenwashing. 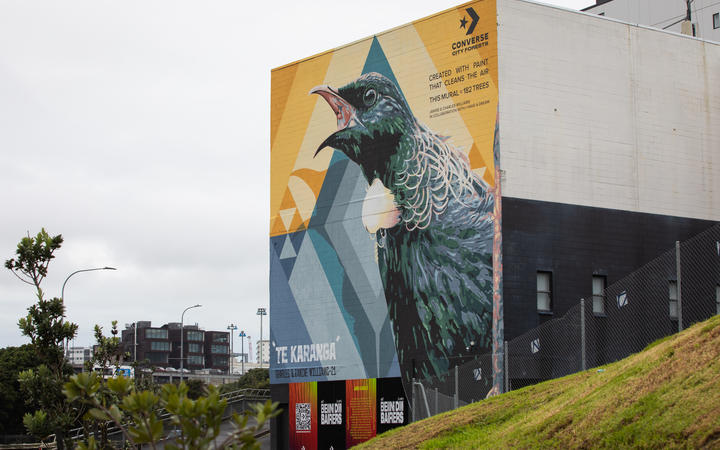 Converse claimed murals it had commissioned as part of Converse City Forests, using special photocatalytic paints made by Graphenstone, "eliminate harmful substances such as carbon dioxide, formaldehydes and gases, improving the air quality around the murals".

It said its murals were the equivalent of planting 9036 trees and counting.

One of its murals was completed on Karaka Street in Auckland in June, and Converse claimed the paint used was the equivalent of planting 182 trees.

Last month RNZ revealed the paint used in the murals was actually a net emitted of carbon, and scientists said the claims, particularly comparing the paint to the planting of trees, were misleading.

Converse has now pulled some of those comments from its website.

The company removed a large swathe of text saying the murals use: "Graphenstones ecological air purifying paint to eliminate harmful substances such as CO2, formaldehydes and gases, improving the air quality around the murals.

"The paints lime base absorbs CO2 during the drying process, acting similar to a tree. This way, any surface coated with it becomes an active air-purifying surface that helps protect people from harmful substances."

It also had a big bold green figure showing the number of trees its murals had essentially planted around the world.

That figure, "9036 trees and counting", has also been pulled, as has the following line: "This number represents the air-cleaning power of our murals around the globe."

There are now no references to the project being the equivalent of trees being planted anywhere on the main page of the website.

Converse has removed any reference to the Graphenstone paint from the main webpage, and has even edited the smaller descriptions of the individual projects that are part of the wider Converse City Forests project.

Any reference to "purifying the air" has been removed from the page, as have descriptions of murals being "sustainable" in both Mexico City and Sydney.

The company did not initially respond to RNZ's questions last month, with Converse's European arm refused an interview request by saying: "Unfortunately, due to Converse's corporate objectives and strategy, we are forced to decline your offer."

Further attempts to contact Converse through its United States and Australian offices were unsuccessful, as were initial attempts through its New Zealand PR, which said Converse would not comment because the "damage is already done".

But, after weeks of pressing the company did eventually respond.

"Sustainability is a fundamental focus of Converse as we strive to reduce carbon and waste through our design, product and process innovation," it said in a statement.

"The goal with this campaign was to foster the creativity of our 'Converse All Stars' team and design a street art solution with sustainability in mind.

"The focus of the press materials was on the CO2 absorption properties of the paint, as provided by Graphenstone.

"For further information on the claims that Graphenstone provides via their paint, we would be happy to make a direct connection."

Graphenstone did initially respond to RNZ questions about the environmental claims of its paint, and has not responded to further requests.