The economy has shrunk by a record amount and fell into its first recession in a decade as it was battered by the government's moves to eliminate Covid-19, but it will already be on the road to recovery.

It followed a revised 1.4 percent fall in the first quarter and was the biggest fall since the current system of measuring data was introduced in 1987.

"Industries like retail, accommodation and restaurants, and transport saw significant declines in production because they were most directly affected by the international travel ban and strict nation-wide lockdown," Stats NZ senior manager Paul Pascoe said. 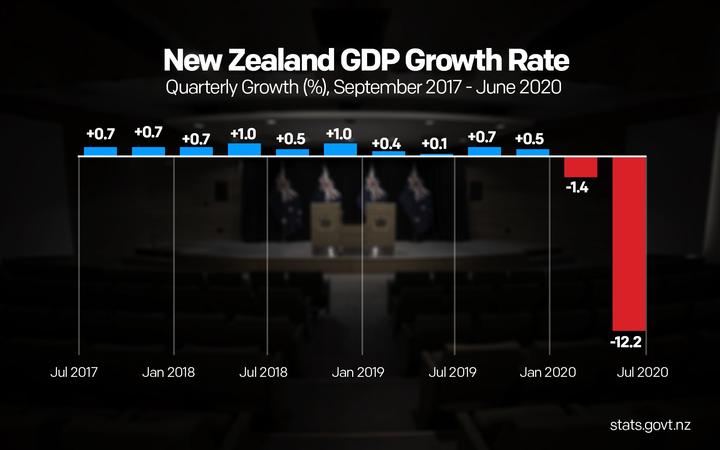 The consensus of forecasts was for a fall of between 12-13 percent, but the Reserve Bank forecast more than 14 percent and Treasury 16 percent.

Service industries fell by 10.9 percent, with consumer spending falling more than 25 percent, but there were double digit falls for manufacturing, and construction.

The economy shrank by 12.4 percent on the same quarter a year ago, while the annual average growth rate fell to 2 percent.

Finance Minister Grant Robertson said the sharp economic decline was no surprise, but the government's measures such as the wage subsidy, business loans, and other schemes had cushioned the impact and laid the foundation for the rebound.

"Going hard and early means that we can come back faster and stronger. Economists expect the current September quarter to show a record jump back to growth in the economy."

Opposition parties were quick to jump on the numbers as an example of government failure.

"The lack of pragmatism and a clear plan from Labour has made the economic hole deeper and the impact harder than it needed to be," National finance spokesperson Paul Goldsmith said.

ACT leader David Seymour said the government had allowed the economy to fall off a cliff and created a mountain of debt. 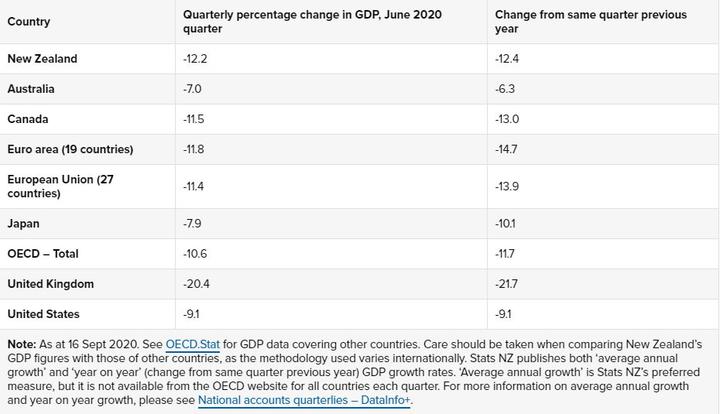 How New Zealand's GDP figures compare to other countries in the OECD. Photo: StatsNZ

But economists had already moved on from the data, which many regarded as 'ancient history'.

"There is little point getting hung up on Q2 numbers. There is likely to be major revisions to the numbers by StatsNZ as new information comes to hand," said Kiwibank chief economist Jarrod Kerr.

"Activity that was halted during the lockdown, particularly across traditional services, was not necessarily cancelled activity but rather deferred."

Kerr said the downturn was the one "we had to have" and it has offered a range of opportunities to transform the economy and set it on a different growth path, but this would mean it would need to keep spending and investing.

Economists are forecasting a rebound of as much as 10 percent in the current quarter to the end of September, which would be the end of the recession.

But uncertainties surrounding Covid-19 and border closure look set to keep business investment and household spending subdued, meaning the actual hit to the economy will persist for much longer.

New Zealand's growth slump was worse than Australia's 7 percent and the US 9.1 percent fall, but was close to contractions in Canada and most of Europe, and much better than the UK's 20.4 percent decline.

Financial markets were unmoved by the numbers.