Dairy prices have fallen to their lowest level in more than a year in the global dairy auction overnight. 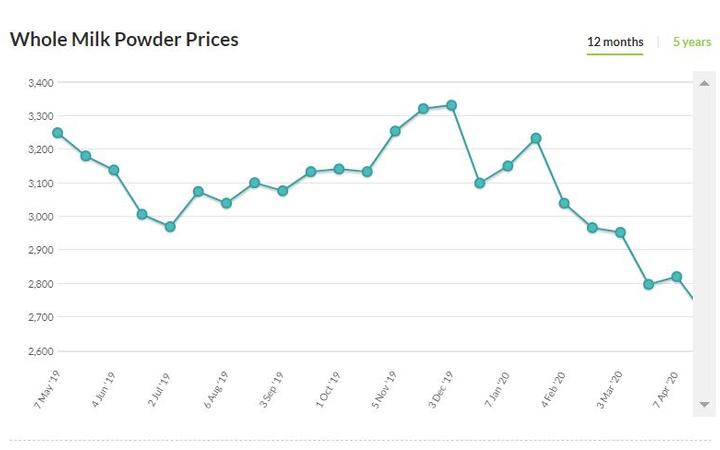 Most of the products offered fell in price, but dairy powders were markedly lower.

The price of whole milk powder, which strongly influences the payouts for local farmers, fell 3.9 percent to $USD2707 a tonne.

That is the weakest since January last year, and below the break-even point for many farmers.

Fonterra says it is not surprised by the latest drop in global dairy prices.

The company's chief executive Miles Hurrell said the drop wasn't not ideal, but he was still confident of paying farmers in the indicated range of $7-7.60 per milk solid for this season. It was too early to predict an opening price for June, he added.

Some commentators were predicting prices could have dropped even further.

''But when you put it against the backdrop of what is a global recession coming at us thick and fast you see that in all the offshore markets two thirds of the population are in some form of lockdown on a global basis so not unsurprising when you consider a lot of the products we make go into the food systems around the world so that is not surprising,'' Hurrell said.

He could not predict what will happen in upcoming auctions, but he did not believe the spring milk peak, which would happen for European and American farmers in a month, would impact as much as some commentators were saying.

''There has been talk or rumours of milk being spilt in some of those markets already because of those domestic markets in Europe and North America have, as the food service market in particular, the out of home consumption has dried up, bu that has been reflected very, very quickly through milk prices.

''We are starting to see farmers in those markets impacted, their milk prices are coming back which has an impact on milk production, so as they head into their spring I get that but a lot of these farmers won't be able to produce feed to feed their cows in a grain feed system, they won't be able to feed those cows and make money, so I suspect you will see that in production over time come back.''

Fonterra is sticking to its forecast price range for this current season of $7-7.60 per kilo of milk solids.  It will narrow that range for farmers in May.

Hurrell said a lot can change in that time, including the exchange rate, which had dropped hugely in the past month.

He said he was loath to give any farmer advice.

''They are the ones experts at making this white-gold.''

He said if he was a farmer he would start to understand what his break even point is.

''I would take a cautious approach into purchasing and cost structures for next season and just watch some of those macro-economic things and see how that may play out, but ultimately farmers know their own land and their own farming systems themselves and they will make their own calls with the best information we can provide them.''

Mr Hurrell said a recent Rabobank prediction for a final payout next year of $5.60 is probably a bit off the mark.

''Well that is certainly at the low end of all the commentators out there.

"We are not coming out at this point with a number.  We will come out in the first week of June and give our prediction and even then it is 18-month out and you have to give farmers clarity of where they see the market in 18-months time, so it is still a fair way out, he said. ''