The Dow Jones Industrial Average has closed 12.9 percent down, in another sign that a global recession could be on the horizon. It's the biggest percentage daily since the outbreak began, and the largest in one day since the Black Monday crash in 1987. 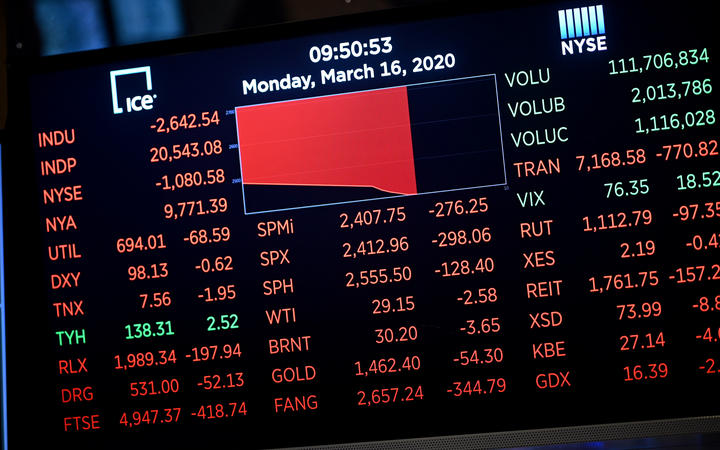 A monitor with advice about the Covid-19 in the empty boarding area for flights at Charles de Gaulle airport in Paris and in the New York Stock Exchange on 16 March. Photo: AFP

The Dow closed as President Donald Trump said a US recession could be on the horizon and that the virus outbreak could last until August.

On Sunday, the US Federal Reserve cut interest rates to almost zero and launched a $700bn stimulus programme.

It was part of co-ordinated action announced alongside the eurozone, the UK, Japan, Canada, and Switzerland.

However, investors are worried that central banks now have few options left to combat the impact of the pandemic.

The new governor of the Bank of England, Andrew Bailey, has pledged to take "prompt action again" when necessary to stop the damage to the economy from the coronavirus pandemic.

David Madden, a market analyst at CMC Markets, said that while central bankers were trying to calm the markets, "in reality it is having the opposite effect".

"The radical measures have sent out a very worrying message to dealers, and that is why they are blindly dumping stocks."

In New York, steep falls as markets opened triggered another automatic halt to trading, which is meant to curb panic selling. Before last week, such halts, known as circuit breakers, had not been used in more than two decades.

But the sell-off continued after the 15-minute suspension, with the Dow losing nearly 3000 points or 12.9 percent, its worst percentage drop since 1987.

The wider S&P 500 dropped 11.9 percent, while Nasdaq dropped 12.3 percent. All three indexes are now down more than 25 percent from their highs.

The FTSE 250, which includes a number of well-known UK-focused companies, ended down about 7.8 percent.

Earlier in Asia, Japan's benchmark Nikkei 225 closed down 2.5 percent and the Shanghai Composite in China ended the day 3.3 percent lower.

On Sunday, the US central bank, the Federal Reserve, cut its interest rates by 100 basis points to a target range of 0 percent to 0.25 percent and said it would offer at least $700bn for support to the markets in the coming weeks.

The move comes as local officials across the US shut schools, restaurants and bars, sports leagues cancel tournaments, and retailers such as Urban Outfitters, Nike, and Gap announce hundreds of temporary store closures.

Speaking after the announcement, Fed chairman Jerome Powell said: "The virus is having a profound effect."

But stock markets dived as investors worried that the world's biggest central banks may now have very little ammunition left to deal with the effects of the coronavirus if the global economic climate continues to worsen.

"They [the Fed] pulled out whatever weapons they had and my sense is I think it may help initially but I don't think it goes much further because this is still a developing issue. They used up basically all their ammunition and we're down to sticks and stones," said Robert Pavlik, chief investment strategist at Slatestone Wealth.

Alongside the Fed, five other central banks - the Bank of England, the European Central Bank, the Bank of Japan, the Bank of Canada, and the Swiss National Bank - also announced measures to make it easier to provide dollars to their financial institutions facing stress in credit markets.

The move was designed to bring down the price banks and companies pay for US dollars, which has surged in recent weeks.

Andrew Sentance - a former member of the Bank of England's Monetary Policy Committee, which sets interest rates - told the BBC's Today programme that banks were acting to ensure enough credit was flowing.

"There was some criticism around the financial crisis that central banks didn't move quickly enough," he said. "I see this as a partly precautionary action for central banks to show that they are doing as much as possible to keep the wheels of the economy turning."

Sentance added that any further cut to the base rate in the UK, to 0.10 percent for example, would be "symbolic, because it wouldn't have that much impact on companies or individuals".