Charities that rely on cheque donations could find themselves scrambling around for millions of dollars as people move towards a chequeless society. 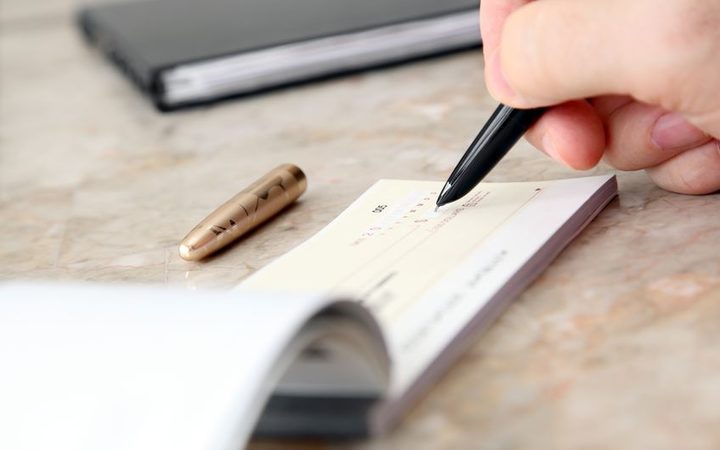 Kiwibank stopped letting its customers either issue or receive cheques last week, having signalled the move a year ago and other banks are expected to follow.

In statements, both BNZ and Westpac said cheque use was in steep decline and they were working with customers to help them embrace new options.

For thousands of New Zealanders, sending a cheque to a charity they support may be the only time they connect with the organisation.

For charities like the SPCA, every one of those cheques count.

It received 15,000 cheques last year - more cheques than any other charity - bringing in more than $1 million a year.

Its fundraising manager, Dominique Lemming, said $30,000 worth of cheques came from Kiwibank customers.

"In our context perhaps that doesn't sound like a whole lot, but it is still meaningful. That's a lot of sausage sizzles or fundraising activities that we have to do to try and replace that," she said.

Older generations tend to send cheques and losing that relationship could have further consequences, Lemming said.

"Those older people often also leave SPCA gifts in their wills and that's a very big part of our fundraised income, so it could have a very serious impact."

There are more than of 27,000 charities in New Zealand that collectively generate about $28.5 billion a year - between $50m and $80m of that is via cheques.

Its executive director, Michelle Berriman, said just 3 percent of cheques sent to charities came from Kiwibank but there could be real problems if the big banks followed suit.

"Some charities, for example the Leprosy Mission, I think they were close to 70 to 80 percent reliant on cheques," she said.

"If the cheques weren't to be accepted anymore, what will happen to that charity?"

The institute's figures show that an email appeal for donations will have a 2 percent response, compared with more than 12 percent for mail.

Kiwibank had made efforts to ensure its cheque-using customers had options, but for some it was more than just a technological inconvenience, Berriman said.

"There's something about the ritual of giving that comes with cheques," she said.

"Sometimes it's the only real connection they have with that charity."

Charities such as Coastguard New Zealand receive many of their cheques by selling lottery tickets, and they cannot sell them online because it would contravene laws that prohibit online gambling.

The Coastguard's fundraising manager, Jo Cowie, said nearly 40 percent of its lottery sales were paid for by cheque and she wanted the Gambling Act 2003 changed.

"We can't even sell tickets by phone, so we have to sell them by mail."

"It's an unfair playing group and New Zealand charities are being penalised," she said.

Cowie said it would be devastating for communities if every bank scrapped cheques.

"In terms of the decline of social profit, it will have a massive impact on our ability to support communities and safeguard lives around the country."

The SPCA wanted banks to press pause on plans to phase out cheques, while the Fundraising Institute is urging banks to give a few years lead in time, so charities can make other arrangements.