Business confidence has dipped further and remains at its lowest level in a decade with firms seeing demand soften further. 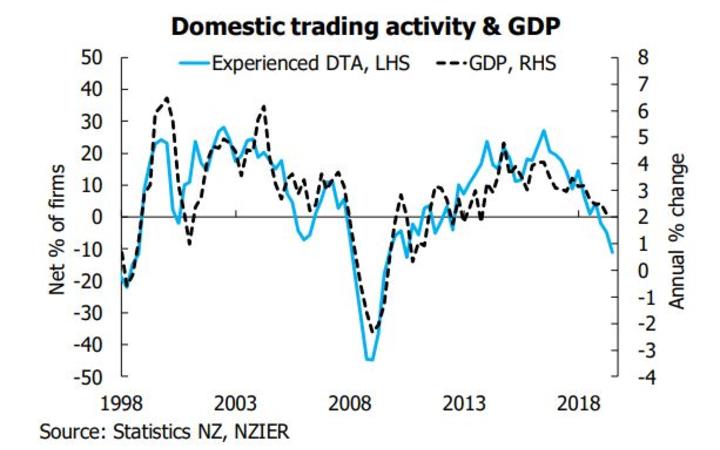 The Institute of Economic Research's (NZIER) quarterly survey shows a net 35 percent pessimism level in the outlook for the broad economy compared with a net 34 percent level in June.

The more telling measure of firms' feelings about their own activity has become more negative, with sentiment dropping to a net 11 percent of businesses feeling downbeat this past quarter, which is its lowest level since September 2010.

NZIER principal economist Christina Leung said the weakness in confidence was spreading broadly across sectors, affecting investment intentions and causing businesses to cut back on hiring in the September quarter.

Although manufacturing sentiment improved, it remained the most pessimistic of the sectors.

"If we look at what's driving that, there's been reduced demand in both domestic and export sales."

"Uncertainty over how the trade war between the US and China will play out is affecting manufacturing globally," she said.

Construction sector activity appears to be slowing, with building firms reporting a fall in their output, which lines up with businesses reporting less intention to invest in plant and machinery, as well as buildings.

"If we look at architects' measure of activity in their office and what that suggests for the pipeline work, it suggests a reduced pipeline of residential and commercial construction over the coming year."

The survey indicated annual GDP growth would fall below 1 percent over the next year, which had implications for NZIER's current forecasts of annual growth slowing to around 2 percent by the end of 2019.

She said the RBNZ was likely to cut the official cash rate again in November, with the possibility of further cuts in 2020.

"The economy looks to be continuing to slow, a lot of that with the reduced demand it's leading to an easing in capacity pressures so that we expect will weigh in inflation in the coming year, it provides more scope for the Reserve Bank to ease monetary policy over the coming years."