New Zealand is still a far cry from matching other countries' investment in research and development, despite new incentives just announced by the government. 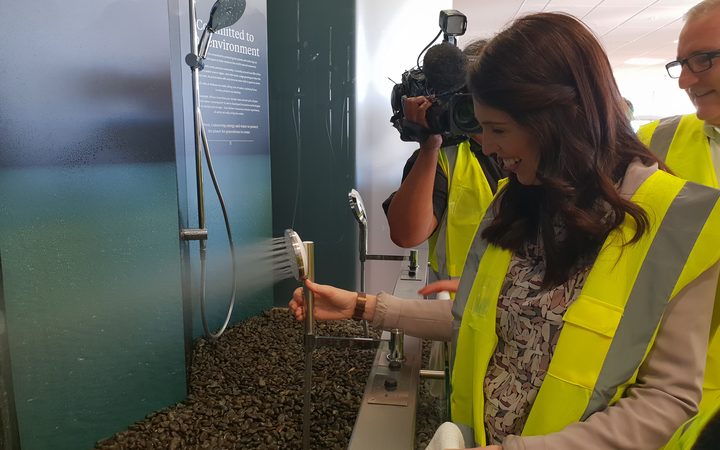 Prime Minister Jacinda Ardern made the announcement at Methven, a leading manufacturer of showers, valves and tapware. Photo: RNZ/Sarah Robson

The government is aiming to boost spending on research and development to 2 percent of gross domestic product by 2028.

It is hoping a 15 percent tax rebate on spending of more than $50,000 will help incentivise businesses to spend up on research and development (R&D).

Research, Science and Innovation Minister Megan Woods said developing an economy that produces high value exports and skilled jobs is a priority for this government.

"We pride ourselves on being an innovative country, but our spending on R&D lags behind many of our international competitors, and this government is not contented to languish at the bottom of table," Dr Woods said.

She said that on a recent trip to Australia she was struck by the gap between what is spent on R&D across the Tasman, compared with New Zealand.

"We were sitting at 1.3 [percent] of our GDP expenditure on R&D, the Australians just over two with an aim to get to three or four... even if we look to our closest neighbour, we've got to do something different, we've got to change the course not to be left behind."

One way the government will measure the success of the incentives is by assessing how many businesses are undertaking R&D, Dr Woods said.

Under the current grant scheme about 300 businesses had an incentive to invest, but the new policy aims to benefit 2000 companies, she said.

The threshold to qualify for the tax rebate was lowered to $50,000 per year, and there is a cap of $120 million on eligible expenditure.

The definition of R&D has also changed to allow more companies from across all sectors to access the tax credit.

The government announced $1 billion of new funding over four years for investment in R&D in this year's budgets.