A cat made famous online because of its permanent scowl has been awarded $710,000 ($NZ971,000) in a copyright case by a California federal court. 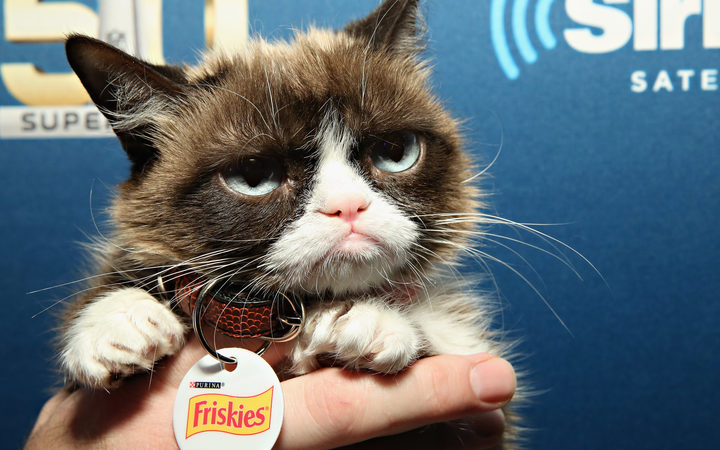 Grumpy Cat Limited sued the owners of US coffee company Grenade for exceeding an agreement over the cat's image.

The company only had rights to use the cat to sell its "Grumppuccino" iced drink, but sold other Grumpy products.

Originally posted on the social website Reddit by the brother of the cat's owner, Tabatha Bundesen, the image of the cat quickly spread as a meme with funny text captions.

In 2013 Grenade Beverage, owned by father and son Nick and Paul Sandford, struck a $150,000 deal to market iced coffee beverages with the cat's scowl on its packaging.

But in 2015 Grumpy Cat Limited sued them for breaching that contract.

A court filing claimed they had exceeded the deal by selling roasted coffee and Grumppucino T-shirts, which Grumpy Cat said "blatantly infringed" their copyrights and trademarks.

The coffee chain's owners countersued on the grounds that the cat and its owners had not held up their side of the deal.

A lawyer for Grenade said Grumpy Cat had failed to mention its brand enough on social media and in a television appearance, according to court reports.

They also alleged that the owners had told them Tardar Sauce was set to star in a film alongside Hollywood actors Will Ferrell and Jack Black, something that did not happen.

But a California federal jury sided with the cat and her owners, ordering the payment of $710,000 in damages for copyright and trademark infringement, as well as a $1 nominal damage fee for breach of contract.

According to Courthouse News, Grumpy Cat herself made a brief appearance during the January trial, but was not present for the verdict.

The cat's perpetually sad and unique expression is said to be caused by feline dwarfism and an underbite - when the lower jaw extends forward.

The six-year-old cat now has a company in her name, and a range of merchandise - including clothing, calendars and soft toys.

She has travelled the world making television appearances and in 2014, the cat even starred in her own Christmas film.