Electricity companies are scrambling to smarten up their methods for fear that technology could put them on the sidelines of a booming but vulnerable business. 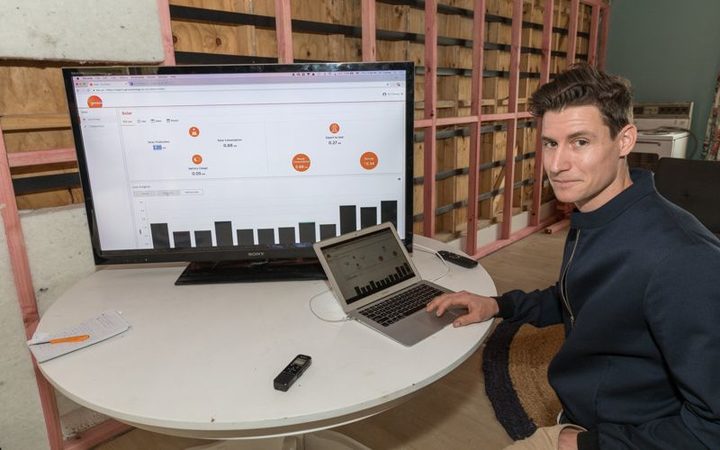 Martinborough app designer Eli Thomas, 30, keeps track of his power use with his smartphone. It's customers like him that New Zealand's power companies want to keep, and they know they will need to offer new technology to do so. Photo: Supplied

They want to avoid the fate of sunset industries like the VCR, and the newspaper, by adopting cutting-edge technology themselves, before their competitors beat them to it.

One example of this is a trial project by Genesis Energy in South Wairarapa. The company has subsidised solar panels and batteries, has set up an electric vehicle charging station and provided an electric car to a community group.

It has also installed its own solar panels at a vineyard, creating a power plant on someone else's roof.

The panels were valuable because they worked best on sunny days when his biggest energy need - refrigeration - was working hardest, he said.

Genesis isn't the only company going straight to the customer with new technology. Contact Energy has a similar scheme involving 30 houses in Wellington. Mercury bought a solar power company last year, rebranded it, and has been pushing solar ever since. And Meridian Energy has similar projects.

But all these are recent developments, and Genesis chief executive Marc England said the earlier behaviour of his industry was not nearly good enough.

"We are in an industry which for a large amount of time was not able to engage consumers in a meaningful way," he said.

"There are brands globally which have already worked out how to engage consumers.

"So what we are trying to be first to market with engaging products and services and so be ahead of the curve."

The old model - build a power plant, run wires to cities - is still relevant but is increasingly at risk. Photo: 123rf.com

Unlike most other industries, the electricity business has changed little since the days of Edison. Its model was constant: build a power plant in the countryside, and transport the electricity hundreds of kilometres along a wire to a lightbulb in the city.

But batteries, solar panels and peer-to-peer trading (selling your surplus electricity to your neighbour) threaten to undo all this, making power plants and transmission wires less important and potentially white elephants.

Mr England said he wanted to take action before that happened: "If we don't do this, we will eventually lose relevancy," he said.

"As an industry we have been slow, so we need to make sure we are ahead of the industry but we also need to also start to mimic what some other industries have done and engage the consumer."

All this involves far more than more just equipment - it involves installing software that keeps people up to date with electricity consumption, minute by minute.

Eli Thomas, 30, is a Martinborough app designer who keeps track of the electricity he uses via an app on his phone, laptop or even widescreen TV.

"You can actually see how much the battery is being charged and discharged throughout the day," he said.

"Today and yesterday have been a bit of an exception - the weather has been pretty bad and we have been using all the power we have been generating [via solar panels].

"If we don't use all the power we are generating, it starts charging the battery."

For the time being, New Zealand's network of power stations and wires is safe from being driven out of business.

But bit by bit, this is changing - and the energy industry knows it - so has chosen internal reforms over potential death by a thousand cuts.