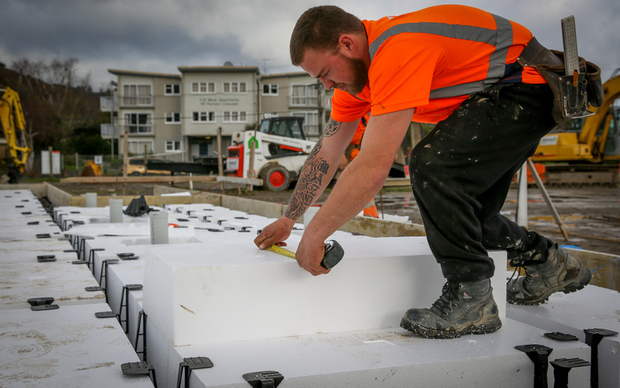 The idea has been put forward in a major industry report done by PriceWaterHouseCoopers (PwC) into the value and role of the construction industry released today.

The previous 2011 report, also commissioned by the Construction Strategy Group, Construction Industry Council and BRANZ, came as the industry emerged from a downturn after the global financial crisis.

Now in the midst of a construction boom, the industry employs one in ten New Zealand workers and makes up 8 percent of the economy.

The head of the Construction Industry Council, David Kelly, said it was still working to smooth out the highs and lows.

"There's been some good work started in terms of government procurement in terms of being a better client but unfortunately very little progress made on trying to smooth out the boom bust cycle.

"So we still have that problem and it will continue to be an issue unless we really spend some concerted effort on trying to address it.

While this boom is expected to carry on until at least 2021, Mr Kelly said builders were conscious a bust could follow.

"They're very wary about taking on more staff, training their staff, investing in their infrastructure and systems because they're worried about the next time there'll be a downturn.

"Now that's a problem because as soon as we have an upturn we haven't got enough people. Firms haven't invested in the infrastructure so they're not ready to deal with the opportunities."

Employment is up in the face of the Christchurch rebuild, as well as major infrastructure work and residential demand in Auckland, but the struggle to keep staff during tough times meant the industry was now scrambling to fill the demand.

Construction Strategy Group chair Geoff Hunt said the industry would struggle with an increase in demand.

"The industry's got enough capacity to travel at the current rate providing it's replacing the people that are leaving the industry, provided the trainees are coming through, but it doesn't have the capacity to particularly lift from where it is now." 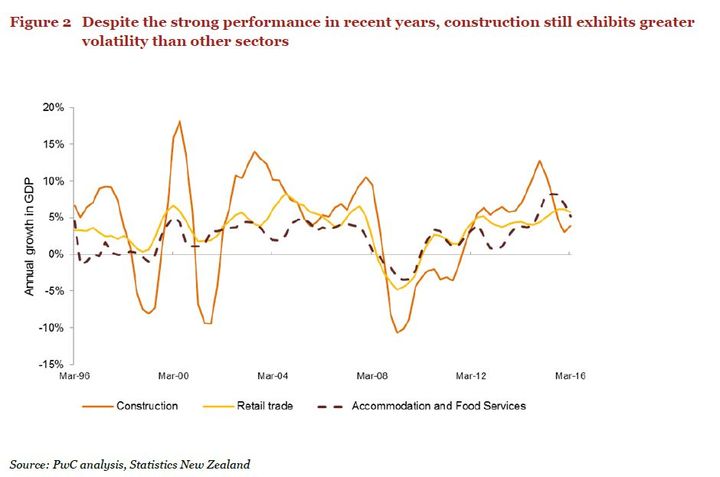 The PwC report recommends a raft of changes to improve the industry, including the government planning major infrastructure projects around the cycle to help the industry in the downturn and avoid a bust.

It also suggests working with the Australian government to fill labour shortages, because their boom and bust cycles run counter to those in New Zealand.

"...labour shortfalls in one country could be filled by excess labour in the other," it said.

Tertiary Education, Skills and Employment Minister Steven Joyce said there was already an agreement for free passage between New Zealand and Australia, but closer ties could be on the cards..

"Whether there's anything more we can do to co-ordinate, we are looking at a joint infrastructure pipeline.

"I think one of the things that's come out over the last few years is the importance of showing visibility to the sector of what the next 10, 15 years looks like in terms of giving them confidence to invest in the development of skills and so on. We're doing that in many parts of New Zealand now and I think we are talking with the Australians about whether we can do that jointly.

Building and Construction Industry Training Organisation head Warwick Quinn said a formal agreement between the two countries could be useful but said he was uncertain how it would work.

"Food for thought I think and certainly a stone worth turning over, although I'm pretty sure many of the larger firms have been over to Australia before to try and entice people across.