A report by the Ministry for Business Innovation and Employment is forecasting a rapid exit of many fossil fuel power plants from New Zealand if the Tiwai Point aluminium smelter shuts down. 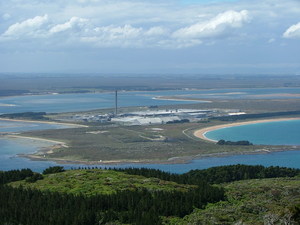 It said the recently reprieved coal and gas fired plants at Huntly would close at the end of 2019 if the smelter went out of business.

A gas fired plant run in Stratford by Contact Energy would close even earlier if the smelter shuts, as Contact itself has suggested.

The report adds the smelter closure would so dampen the need for electricity that total demand would not return to current levels until the late 2020s.

The smelter uses about 13 percent of New Zealand's electricity and has the right to buy it until 2030.

But a subclause of that contract allows it to quit in 2018, as long as it gives a years notice - meaning next year is a crunch year.

A Tiwai exit is one of five scenarios considered in the Ministry's new report, which looks out until 2050.

Other scenarios look at a high input of new technologies, and suggest there could be over 580,000 solar panels and battery systems in New Zealand by 2050.