Auckland Airport has had another strong year, with net profit up more than 17 percent, reflecting growth across all its businesses. 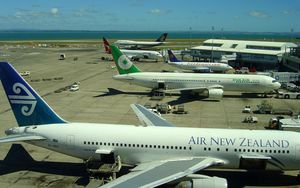 Passenger movements at Auckland Airport rose to 17.3 million in the year to June. Photo: Wikicommons

The airport company's full year net profit was $262.4 million in the 12 months ended in June, while underlying profit was up nearly 21 percent to $212.7m.

Auckland Airport chairman Sir Henry van der Heyden said the company had had an excellent year and was confident that it would continue to deliver strong financial results in the next 12 months.

Revenue was up 13 percent to $573.9m, supported by strong growth in the retail, aeronautical and transport divisions.

"To support this growth, we have commenced a major upgrade of our international departure area, and have continued the planning and design work required to successfully construct our 30 year vision's combined domestic and international terminal building and second runway," he said.

Auckland Airport expected the underlying net profit after tax for the 2017 financial year to be between $230m and $240m.