Trade Me has had its profit fall, after it wrote down the value of its poorly performing dating website. 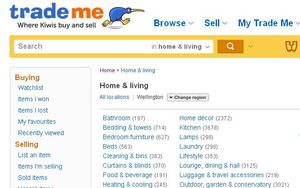 The online trading company's net profit fell 6.5 percent to about $75 million in the June year, compared with $80m last year.

Its underlying profit, which excluded the costs for the FindSomeone website, rose 3.5 percent to $83m.

Trade Me said the dating site had struggled because of competition from overseas websites.

But it said its classified businesses, which included real estate, car and job advertising, all earned more, and its online auction division had an increase in earnings for the first time in two years.