Dairy prices have fallen in the latest global auction overnight, with New Zealand analysts pointing the finger at a "huge volume of milk" coming out of Europe. 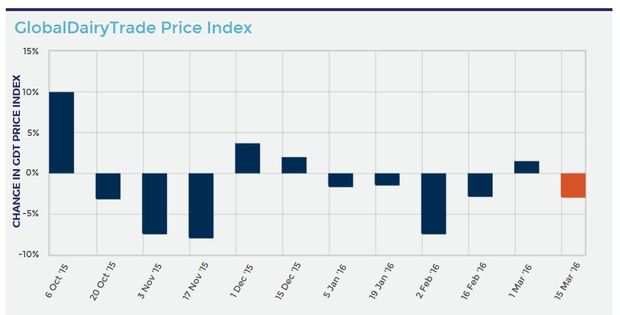 This week's drop follows a small rise two weeks ago, which was the first this year. Photo: GlobalDairyTrade

The average price across all of the products measured by the GlobalDairyTrade (GDT) index fell by 2.9 percent to $US2190 a tonne.

This week's dip in price follows a small 1.4 percent rise two weeks ago, which was the first rise this year and followed four consecutive drops.

The whole milk powder price, which is the key index for New Zealand, dropped by 0.8 percent to $US1971 a tonne, with butter down 2.8 percent and cheddar down 5.6 percent.

It has been estimated New Zealand farmers need a whole milk powder price of $US3000 to break even.

Last week, Fonterra cut its forecast milk price payout for the second time in three months, from $4.15 a kilogram of milk solids to $3.90 a kilogram.

The co-operative estimated at the time that the cut would knock $400 million from farmers' incomes.

Fonterra and market commentators had been expecting GDT prices to improve towards the end of the year, as stockpiles of product in the key Chinese market are reduced.

That had signalled European dairy production would not slow down, despite the over-supply in the market, she said.

"There's certainly nothing to support the markets really at the moment, and we're still dealing with that huge volume of milk that's coming out of Europe and that's really just weighing down the market."

She said futures contracts were pointing to as much as a 25 percent rise in prices by the end of the year, but the uncertainty over European production would remain an obstacle to an improvement.

"There are slightly brighter spots for the commodities that New Zealand produces, such as milk powder, but it's going to take a long time for this market to recover and farmers are going to face another year of low prices."

The dairy-sensitive New Zealand dollar fell more than a quarter of a cent after the auction to just below 66 US cents, a two-week low.