All eyes are on Wall Street after panic hit world stock markets for a second day, with prices dropping sharply in Asia and Europe. 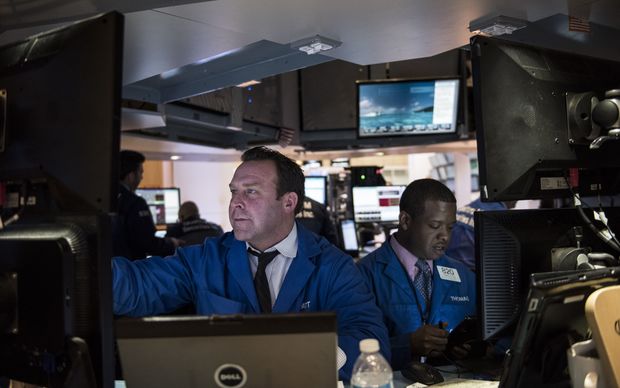 Traders work on the floor of the New York Stock Exchange Photo: AFP

Japan's market slumped 5.4 percent yesterday and investor fear spread to Europe, where London's FTSE index hit a three-year low overnight, after more than £40 million of shares were wiped from the market on Monday

Mark Lister, from Craigs Investment partners, told Morning Report it was shaping up to be another rough day in the market.

"The negative tone will persist for us. Last night wasn't as rough as the previous night on global markets so maybe things will be a little calmer in the Asian trading session, but I think on balance, you've got more concerns than encouraging factors.

"I think it will be another cautious day. All eyes will obviously be on the bigger markets like Australia and Japan when they open."

He said New Zealand was more insulated than other countries from the current issues.

"New Zealand is lucky, in that we don't have energy companies or financial stocks on our markets, so that will keep us somewhat insulated. We'll always fall a little bit less than other markets will."

Fears over the stability of banks, especially in Europe, were driving the falls, according to Michael Mackenzie, markets editor for the Financial Times.

He told Morning Report the current slump was almost a replay of the financial crisis in 2008, with institutions such as Deutsche Banks seeing its shares fall another 4.3 percent today after a 9.5 percent drop yesterday.

"At the start of this year, a lot of investors were very optimistic about banks. They thought that the global economy was recovering, they thought that long-term interest rates were going to rise and that helps banks generate greater profits, and what we are seeing here is a capitulation trade. We've seen in the US for example the S&P financial index is down some 15 percent so far this year, which is a huge drop in the context of the market itself only dropping 9.7 percent this year."

While the situation did resemble the 2008 crisis, Mr Mackenzie said it was more a bet on a sector that has gone awry.

"One thing we can say is that the financial sector, particularly in the US, has been reinforced and made a lot safer. They do far less speculative trading than they did before 2008. But I think what you are also seeing, particularly in Europe, is that there are genuine concerns that banks there may be exposed to losses that we don't know yet and you're seeing investors aggressively sell their debt as well as their shares."

He said he expected the instability to continue for several months yet, until there was clarity on the global economy.

He said all eyes would be on China when its markets start up again next week after shutting down for the Chinese New year.